Batman
Batman Returns
Mark Canton is a film producer and studio executive. Canton was a Warner Brothers executive that oversaw the development of both Tim Burton Batman movies.

It was Canton's idea to involve Prince with the Batman movie, as his major hit prior had been Purple Rain at WB. While reviewing rushes and dailies at Pinewood, it is said that Canton would mutter "Where's Robin? Where's Robin?" angered that Ricky Addison Reed was let go and written out by Warren Skaaren prior filming.

Canton was having a conversation with Michael Keaton in his office when Sean Young confronted him wearing a Catwoman costume, demanding to have a meeting with Burton about the part. 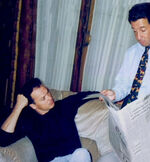