Maxine "Max" Gibson was Terry McGinnis' friend, and later an invaluable ally in his life as the second Batman. She was originally created for the animated series Batman Beyond, but was later incorporated into the comics.

Maxine Gibson is the best friend of Terry McGinnis. She is the smartest person in Terry's High School. Max is a straight "A" student, she is even capable of becoming a valedictorian. When Maxine was running a program on "who Batman was?" She ran a search on height and age. She ran a search on who Jokerz were on her program also. Terry McGinnis turned out to be at the top of the list. When Max was being terrorized by one of the Jokerz that attended her high school, she found out that Terry was not a member of the Jokerz. However, he was Batman. From that point they became partners. Although Bruce Wayne doesn't like the idea of Max helping Terry out with his war on crime, she has proven herself in the past.

The Terror of Cyberspace

Max returns from her travels to help Terry with Hush Beyond. Maxine has recently come into contact with a fabled computer hacking cabal called Undercloud. The leader of Undercloud is code named Rebel and she is offering Maxine the chance to join her. Rebel intends to bring down the entire socio-economic hierarchy of Gotham. Maxine agrees to join Undercloud in order to infiltrate the Unternet which Undercloud now controls but also because Undercloud has threatened to harm anyone close to her if she refuses. Max plans to learn everything about Undercloud and turn Rebel's deviant knowledge against her when the time is right.

The next day, Maxine heads to the Fields-Rich Mall for a meet with a follower of Undercloud. Max finds a place in the galleria to sit and waits. Within a few minutes, an old man sits at a table right behind Max. Max then gets a call from her cell and picks it up. The voice sounded haggard but Max immediately caught on that it was the old man sitting behind her who was doing all the talking.

The old man informs Max not to turn around and continue talking on the cell. The old man informs Max that Undercloud is a collective of devoted yet brilliant followers who are fighting for the greater good. Each member only knows a handful of information that Rebel divulges thereby avoiding any chance of Undercloud being exposed or threatened. Max scoffs at the old man's professions on how benevolent Undercloud's goals are. She points out all the rumored thefts that Undercloud was part but could never be proven. The old man admits that there were a few casualties but that is a common factor in war. The old man tells Max that she must prove her devotion and loyalty to Undercloud by performing a high risk cyber theft. 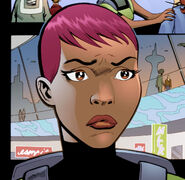 Retrieved from "https://batman.fandom.com/wiki/Maxine_Gibson?oldid=158660"
Community content is available under CC-BY-SA unless otherwise noted.