Maxine "Max" Gibson was Terry McGinnis's classmate and friend who later became an invaluable ally in his life as the second Batman. Her school I.D. number is 2029.

Max's childhood wasn't very happy. Her parents divorced when she was young, so she and her sister were left in their mother's care. To make ends meet, Mrs. Gibson traveled around a lot, leaving the girls to fend for themselves. In spite of this, Max and her sister managed to cope. Later, when Max was in her teens, she went off to Hamilton Hill High School.

Max was the leading student in her class at Hamilton Hill High School. She received a perfect score on the standardized GAT test and her class grades made her the lead candidate for class valedictorian. Also a computer genius, as a hobby Max wrote a computer program to discover the new Batman's secret identity. She narrowed it down to a basic physical description, plus the fact that he was somehow connected to the high school.

Unfortunately for her, her achievements had drawn the anger of fellow student Carter Wilson, the class's second-highest achiever who was driven to be first, no matter what. He also led a secret life as "Terminal," the leader of a gang of Jokerz. Using them, he tried to alter the records at the high school, and when that failed, to kill Max. After the first attempt on her life failed, Max adapted her identification program to find the Jokerz' leader, but a mistake in her programming led to the computer spitting out a list of names which included Terry's, but not Carter's. Deciding to take action, she sent a message to Terry that she knew "his secret," and ordered him to meet her.

Terminal followed her and threatened to kill her, but Batman showed up after seeing her message and saved her. Terminal's true identity was revealed, and she realized that the Tomorrow Knight was none other than Terry. In private, she told Terry that she knew his secret, but promised not to tell anyone and offered to help him.

Max played an integral part in Batman's war on crime: when it comes to crimefighting, she employs her considerable intelligence and skills at computer hacking and investigation to aid Terry, compensating for his lack of training as a detective.

She was likewise invaluable at helping Terry maintain his "normal" life, including coming up with excuses for his long absences for Dana Tan, creating diversions that enabled him to slip away when necessary, keeping him updated on developments at school that he missed out on, or just helping him catch up on his schoolwork. Terry jokingly referred to her as his "Alfred" after she made her own joke about not wanting to be called "Robin". Aside from her intelligence, she was also valuable to him as a sympathetic friend with whom he could share confidences.

Beneath her confident, even brassy, demeanor, Max had a craving for both affection and excitement that sometimes got the better of her cool head. Partially this was explained by her domestic life: her parents were divorced, and she lived a mostly solitary life, without much contact with her one sister. At times she pressed Terry to let her take a more active role in his investigations; he was reluctant to involve her, but sometimes she stepped forward before he could stop her. This led to an unfortunate addiction to Spellbinder's love-filled virtual reality technology, while she was helping Terry investigate illicit gaming parlors. Another time, she was nearly killed by the assassin Curaré when she sneaked into her target's hotel room to look for clues. But she still proved her worth to Terry as a partner time and again, most notably when she tracked down, and then disarmed, a nuclear weapon hidden in a museum, while Terry was fighting Curare.

Over time, she also became acquainted with Bruce Wayne, who was even more resistant to the idea of her getting involved. Eventually, though, he came to accept her as Terry's friend and ally.

Along with Terry, she became acquainted with Zander, the sheltered leader-in-training of the terrorist organization Kobra. Having never before met a woman who challenged or defied him, Zander became smitten with Max after she beat him in a game of "Sentries of the Last Cosmos." Going against the wishes of his Kobra minders, he arranged for Max to be kidnapped and brought her aboard his organization's ship, revealing his plan to remake the earth as a home for spliced human-dinosaur hybrids, and asked her to be his queen. Needless to say, she refused. She escaped the ship with Terry before it exploded, with the help of Kairi Tanaga.

It is unknown whether she continued to aid Terry after they left high school. 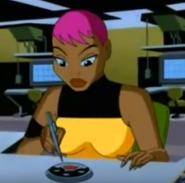 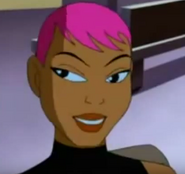 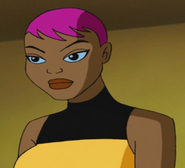 Max working on computer
Add a photo to this gallery

Retrieved from "https://batman.fandom.com/wiki/Maxine_Gibson_(DC_Animated_Universe)?oldid=184454"
Community content is available under CC-BY-SA unless otherwise noted.