Batman (all episodes)
Batman: The Movie
Return of the Caped Crusaders
Batman vs. Two-Face

The chief of Gotham City Police Department, he is often seen alongside Commissioner Gordon.

Hailing from Ireland, Chief of Police O'Hara is the hardest-working cop in Gotham City. On top of his regular duties, he also heads up the GCPD Anti-Lunatic Squad. O'Hara is quick to condemn criminals and sometimes lets his emotions get the better of him. He is often frustrated by the many puzzles and tricks offered by Gotham's super-villains. Nevertheless, he always follows Gordon's (or Batman's) orders, leading his men in to help the Caped Crusaders whenever they need it. He is happily married, though it is unknown if he has any children.

Like Robin, when Chief O'Hara gets excited, something terrible or unusual happens, he is quick to say something. 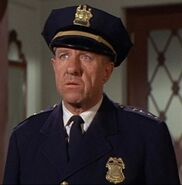 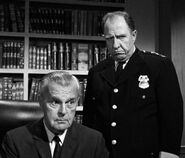 Retrieved from "https://batman.fandom.com/wiki/Miles_O%27Hara?oldid=222435"
Community content is available under CC-BY-SA unless otherwise noted.