Talented Mime Artist
Camilla Ortin was a rich young heiress that once led a life of luxury and art as she led a group of touring mime artists across America. Sadly this ended up bankrupting her an she was left broke. Several years onwards, Camilla had grown to hate loud sounds,and went on a short crime spree, trying to silence Gotham City for good.

As a child, Camilla already hated loud sounds due to her fathers line of business (Running a fireworks industry). She instead opted to study arts, and after the death of her parents she inherited her fathers fortune, and used it to fund a travelling group of mime actors. Sadly however this backfired and she was left penniless.

Her hate for loud sounds grew on only then, and several years later she began sabotaging areas of Gotham City that emitted loud sounds. She began by vandalising several church bells in between doing street performances. During one of said performances, she was frightened by a taxi driver when he honked his car horn at her, resulting in Mime shooting the man with a handgun. Batman saw this and chased her to a park where he knocked her down to the ground. Mime put on a innocent face however and Batman felt bad for her, offering to help her up, only for Mime to then shock him with her electric gloves, allowing for her to escape.

Later Mime tried to sabotage a performance from a glam-metal band called 'Twisted Blister'. She successfully incapacitated all the band members with her shock gloves only to be set upon by Batman and Robin. Mime tries to fight back and picks up a guitar as a weapon, however Robin disrupts the feedback on it, causing a powerful screeching sound, making Mime to reel over in pain. Afterwards she is arrested by the GCPD and sent to Arkham Asylum.

Mime was a very talented stage actress and mime artist, her main weapon was her shock gloves, which were powerful enough to render at least two people unconcious at the same time.

Mime appears in a minor role in The Lego Batman Movie as one of the many villains who assisted the Joker. 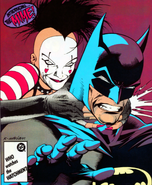 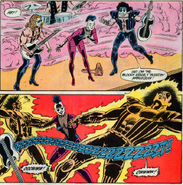 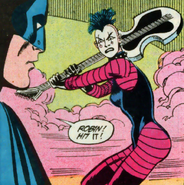 Add a photo to this gallery
Retrieved from "https://batman.fandom.com/wiki/Mime?oldid=217790"
Community content is available under CC-BY-SA unless otherwise noted.