"Mirror, mirror, on the wall...who's the smartest crook of all?"
―Mirror Man[src]

The Mirror Man is a criminal scientist who uses mirrors in his crimes, in a fashion similar to the Mirror Master. He often tries to expose Batman's secret identity.

During Batman's early career, a minor criminal named Floyd Ventris had seen a new breed of costumed supervillain rise to prominence in Gotham City. He was determined to share in the spotlight, but a catchy name was not enough. Ventris intended to commit flamboyant crimes too, of course, but the achievement that would truly catapult him to fame would be the revelation of the face that an unmasked Batman saw in the mirror.

Apprehended by the police and sentenced to seven years at Gotham state prison for a string of petty crimes, Ventris quickly masterminded a daring escape. Breaking a pocket mirror, Ventris used a fragment to reflect the searchlight into the eyes of a guard. Recognizing that that broken mirror had brought him good fortune, Ventris declared that "it [was] like an omen" and the Mirror Man was born. He didn't wear a costume, but his bald head, noticeable overbite, and square mirrored glasses soon made a strong impression.

Among Mirror Man's first thefts was an invention which he described as a "two-way electronic mirror that x-rays anything covered by cloth". During his subsequent string of robberies, the villain used every opportunity to scan Batman's face whenever the Dark Knight interfered. The crimes become more and more risky and bizarre as they took a back seat to the Mirror Man's obsession with finding suitable mirror themes and attracting Batman's attention. For example, his first scheme called for penetrating a heavily-guarded military base, hijacking a solar mirror being tested for air defense purposes, and turning it on a carnival ice skating rink. Ventris would then rob the rink's box office in the chaos, a relatively low payoff for an extremely impractical and meticulously planned operation.

Batman and Robin soon arrived on the scene in the Batplane, which they used to deploy a smoke screen that would block the reflection of the solar mirror. They then descended by rope ladder onto the solar mirror and pursued Mirror Man's retreating gang. Batman spotted Ventris fleeing into the carnival's hall of mirrors; as he entered he became disoriented by the multiple reflections. Mirror Man pointed his mirrored x-ray device at Batman but Robin appeared, throwing off his concentration.

Mirror Man's next scheme also involved hijacking a massive mirrored object, in this case a telescopic mirror developed for an observatory atop Mount Malador outside Gotham. This required the use of a large cargo truck, which was unable to outrun the Batmobile. Fearful of being overtaken by Batman, Ventris sacrificed the mirror by throwing off the truck. He was then able to achieve enough of a lead to lay an ambush: a member of his gang deployed a large mirror which reflected Batman's own headlights back into his own eyes and caused him to veer off the road. As a stunned Batman staggered from the car, the mobsters restrained him. This allowed Mirror Man to focus his device on Batman's face, exposing him as Bruce Wayne. Hoping to preempt the disclosure, the Dark Knight arranged for the Gotham Gazette to interview Bruce Wayne about the instances in which he was mistaken for Batman. Mirror Man's gang laughed hysterically when their boss told them his discovery.

Convinced that he was correct, Mirror-Man planned his next crime to take place at the site of a live television broadcast: the televised fabrication of a giant mirror being manufactured with pure silver as opposed to silver nitrate. The mirror was being produced at Apex Glass Works, Gotham's oldest glassworks, and Ventris hoped to pilfer the silver ingots used in the process. As anticipated, Batman intervened. Before the rolling news cameras, the Mirror Man held up his two-way mirror in front of his opponent's face once more; this time, however, Batman was wearing a second mask of warped mirrored material beneath the cowl that distorted his features. Ventris was so shocked he made no attempt to resist when he was overpowered and knocked out. Returned to his cell at the state prison, he made a solemn vow: "I tell you Bruce Wayne is Batman - and one day I'll crash out and prove it!" (Detective Comics #213, November 1954)

The Mirror Man's story was reprinted in Batman Annual #3 (June 1962) although Ventris did not return until nearly ten years later. Having found work as the prison gardener, he became increasingly testy about his reflection, unable to look at himself as a failure and still believing he was destined for greater things. Still fixated with Bruce Wayne, Mirror Man escaped and set out to prove Batman's secret identity once again. His first scheme involved snarling traffic across Gotham by replacing the billboards with giant mirrors on a sunny day. While the police were preoccupied preventing accidents and stemming the confusion, Ventris reunited with his old gang and stole a jade mirror at the Gotham Museum. To thwart the possibility of an intervention by Batman, he simultaneously arranged for one of his men to shadow Bruce Wayne. Wayne proved too quick-witted for the thug and managed to slip into his Batman guise anyway. When he appeared at the museum, Mirror Man initially believed he was a robot programmed by Batman to protect his secret identity. An attempt to fry the supposed robot's circuits with a jamming unit failed.

Complicating matters further was reporter Vicki Vale's discovery of Mirror Man's objective. She deduced that his next target would be at a book society meeting, where a rare first edition of Lewis Carrol's Through the Looking Glass was on display. With Bruce scheduled to be a guest speaker during that event, Vale knew he wouldn't be able to change to Batman so she hired an actor to stand-in for him. Independently, Batman and Robin had made arrangements for Alfred Pennyworth to impersonate Wayne. Between the distraction of the two Waynes and another mirror diversion, the Dynamic Duo lost the Ventris gang again.

The discovery that an actor had portrayed Wayne at the meeting seemed to prove Mirror Man's case and, after Batman finally captured him, he said as much to the assembled reporters on the scene. Denouncing the allegations as absurd, Batman insisted that Bruce Wayne be called to the scene to refute the claim once and for all. The moment Bruce showed up, Ventris began pawing at his face and hair for signs of make-up. There were none. Publicly discredited, the Mirror Man was returned to prison, unaware that Alfred was standing in for Batman with the assistance of a heavily padded costume. (Batman #157, August 1963)

Batman never faced Mirror Man again, though he could recall Ventris and his crimes without difficulty while reflecting on the many bizarre supervillains he had fought. (The Untold Legend of Batman #2, August 1980)

At some point Mirror Man was transferred to Blackgate Penitentiary, where he was freed one final time as part of a mass jailbreak engineered by Ra's al Ghul. Ra's had liberated all of Blackgate's convicts with the intent of using them as part of a massive campaign against Batman, but Ventris had other plans in mind. He walked away from Ra's, unwilling to fight under someone else's orders or risk capture by Batman again. While most of the other villains were later rounded up, Batman noted that Mirror Man remained at large. (Batman #400, October 1986)

By his own admission, Ventris remained inactive and content with obscurity. As he aged he lost the appetite for grandiose capers and focused on small, modest heists. Based on his intimate knowledge of the bulky two-way electronic mirror used in his original crimes, Mirror Man was able to replicate and refine the technology. He was left for dead by another minor villain, Tony Finch, and was last reported in critical condition at Gotham General Hospital. (H.E.R.O. #9, December 2003)

Another villain known as "Mirror Man", also referred to as Narcissus, appeared in Jeremiah Arkham's imagination. Unlike Ventris, Narcissus was obsessed with his own reflection, rather than the theme of mirrors in general, and spent most of his time staring into mirrors from his cell at Arkham Asylum. (Battle for the Cowl: Arkham Asylum #1, June 2009)

Floyd Ventris had no special powers or abilities. He did possess some technical proficiency, but his accomplishments were limited to reverse engineering and refining a two-way electronic mirror stolen from a dead scientist's estate.

The Mirror Man's reflective glasses were known as "mirror lenses" and utilized the same technology as the electronic two-way mirror device. He used them primarily for safecracking purposes, reading the combinations printed on a safe's interior. 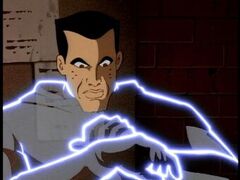 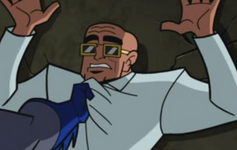 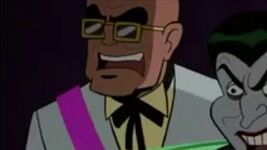