Fred Tatasciore
Mister Hammer, also referred as Mr. Abramovici, was seen as the Joker's one armed lieutenant in his army. Hammer was mentioned to be with his conjoined twin, Sickle, and who performed at a Russian circus. However, they were forcibly split up by Joker as he believed they would function better as fighters separately rather as one force. Sickle was then violently thrown out of Joker's gang, as the Clown Prince of Crime believed that his brother was more than enough for his army. Angry at his brother for remaining at Joker's side, Sickle ended up joining the Penguin, Joker's rival, and his gang in retaliation, and hoped to show his former employer and brother just who was the strongest Abramovici; and thus started a true brotherly rivalry.

Mister Hammer and his brother, Sickle, were conjoined and orphaned twins who performed in a Russian circus, and who developed a reputation for brutality which attracted the attention of the Joker. Joker sent his cohort, Harley Quinn, to recruit the twins, but the circus manager refused. However, he subsequently turned up with a Glasglow smile that was carved into his face, and the twins were recruited into Joker's gang. During a fight between the Abramovici's and Batman, Joker had an ingenious idea to separate the brothers, and acquired the help of Dr. Thomas Elliot to perform the surgery and who cut the twins in two. After the surgery was completed, Joker favorably chose Mr. Hammer to be his "right-hand man" and left Sickle for the Penguin, who hired the twin to be apart of his gang. Ever since, the Abramovici's operated alone in Gotham City, and later Arkham City, however, Sickle always had a disliking for Joker for separating him from his brother.

When Batman went to Joker's Funland and tried to find Joker, who remotely tried to assassinate Catwoman, he went into the vents and tried to surprise Joker, but he came into the middle of Harley's announcement. Harley explained to her group that Dr. Stacy Baker had failed Mr. J and that she couldn't cure him. Baker pleaded that she couldn't do anything, but Harley called her a quack, and then kicked her from Joker's office onto the floor below. Harley announced: "Do you want to see a show?" and they started to chant "Kill," as Mister Hammer tried to beat Dr. Baker with his sledgehammer, but she started to crawl away. As soon as Mister Hammer got Dr. Baker cornered, Harley stopped him by saying that the Joker needed her alive, so that she could get tortured more. The thugs dragged her away, as Batman followed them, going through a bunch of other thugs.

After he saved Dr. Baker and got the Remote Electric Charge, Batman made his way to Joker's office, where Harley locked the doors to prevent him from getting in. Yet, by using the REC, Batman knocked the steel doors that blocked him from the Joker. Harley yelled at him for knocking the steel doors, but as soon as Batman grappled up to the office, Mister Hammer kicked him back down to the floor. Harley said: "Meet Mister Hammer. He's going to teach you some manners." After he fought Mister Hammer and a bunch of thugs, Batman won and made his way toward Joker, yet he found him dead and Harley crying. However, it was just a gag and Harley knocked out Batman with her Baseball Bat.

While Batman traveled beneath the subways of Arkham City to find Ra's al Ghul's, Hammer led a small group of Joker's men beneath the sewers to control access to the subways, and formed an alliance with Killer Croc, as they both came from a similar past. Croc promised Hammer to only feed on the Penguin and Two-Face's men and spare Joker's. However, during the events of Protocol 10, Croc fed on the bodies of any inmate who was killed during Hugo Strange's plan and was washed up beneath the sewers.

Later on, Batman encountered Hammer again during a fight with Joker and a Titan Henchman at the Funhouse. After he defeated all of them again, the building collapsed on Batman, however, Hammer survived the incident.

After the Joker's death, Sickle and Hammer were found together at the Steel Mill, and talked about how they wanted to be together again. If you Scanned them, you answered a Riddler Challenge, although they were both enemies, they both ignored you if you did anything.

Following the brother's reuniting, Robin goes to find Roman Sionis, as he became a new gang leader in Arkham City. Robin went through Black Mask's hideout, where he found out that some of the Penguin's thugs joined him, and that the Riddler also helpied Black Mask. Lastly, Robin went onto the Freight Train and beat through some of the Joker's thugs who went rogue after the fall of Joker to join Black Mask. After he got through three cars, Robin came to the end to find a few thugs, Mister Hammer, and Black Mask who blocked the control box. After he beat the thugs and Mister Hammer, Robin left Black Mask for last, apprehended him, and destroyed the control box that moved the train.

Mr. Hammer on the floor. 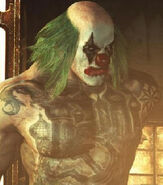 A closeup of Mr. Hammer.