Molly was a character in the Batman 1960s series. She was portrayed by Jill St. John.

Nothing much is known about her except that she was the Riddler's attractive personal assistant who helped in the Prince of Puzzlers' dastardly crimes.

Batman met her at the discothèque called: "What A Way To Go Go!" and she drugged his orange juice.

While he was distracted, she and Riddler captured Robin and made a mask of his face to wear as a disguise for Molly as a trap to kill the costumed crime fighter.

Batman, however, saw through her disguise and after she was taken to the Batcave, she climbed to the atomic pile that was used to power the Batmobile.

Batman used the Batrope and tried to save her, but she was too scared and eventually slipped from Batman's grip, causing her to fall into the atomic pile which vaporized her.

The Caped Crusader was in great distress that he couldn't save her and says: "What A Terrible Way To Go Go".

Molly with the Riddler

Molly with her Robin disguise 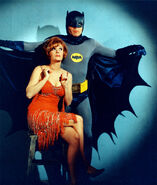 Add a photo to this gallery
Retrieved from "https://batman.fandom.com/wiki/Molly?oldid=226653"
Community content is available under CC-BY-SA unless otherwise noted.