Mr. Freeze was an enemy of Batman. Cold in appearance and personality and forced to live in sub-zero temperatures, he decided to put all of Gotham on ice as well as avenge himself on Batman whom he blamed for his condition.

His final appearance involved his most diabolical scheme of all when he decided to steal a icing formula from scientist Professor Issac Issacson who had a photographic memory it in his head. He also had famous figure skater Glacier Glaze to act as his spy. After capturing the professor, Freeze tried every way to get him to talk but Issacson proved to be a tough nut to crack when it was revealed that he was an Icelander so freezing temperatures didn't affect him. Freeze then injected him with dry ice and placed him back in his quick freezer, which finally made Issacson spill the beans. After succeeding in getting the formula, Freeze began his scheme of freezing all of Gotham City using a deadly ice ray. However his plans were foiled again when the Dynamic Duo found his iceberg disguised submarine thanks to a homing device that had been attached to one of the flippers of his own pet homing seal Isolde. He, Glacier and his henchman when then handed over to the police for imprisonment once more. 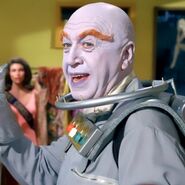 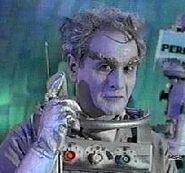 Retrieved from "https://batman.fandom.com/wiki/Mr._Freeze_(Dozierverse)?oldid=228454"
Community content is available under CC-BY-SA unless otherwise noted.