Mr. Freeze is a villain in the LEGO video game series, primarily the LEGO Batman trilogy. A scientist specializing in cryogenics, Victor Fries froze his wife in suspended animation to allow him time to cure her fatal disease. However, an incident in his lab transformed him into a cold-blooded being, require to be kept at sub-zero temperatures to survive. Creating a suit to maintain a suitable environment and a Freeze Gun, Mr. Freeze's crime usually utilize ice or freezing technology. Many of them also serve to gain necessary resources to cure either his or Nora's conditions.

During the mass breakout at Arkham Asylum, Mr. Freeze joined forces with the Riddler, Two-Face, Poison Ivy and Clayface. Together, the group agreed to break into the Gotham Gold Reserves and steal the bullion stored there.

After he acquired the key from the Gotham Bank, Riddler requested Freeze's help in obtaining his old Freeze Cannon, allowing them to cross the Gotham bay to the Reserves' island. Together, they broke into one of his old hideouts, the abandoned Snowy Cones Ice Cream Factory, fighting through GCPD officers and staff resisting. After gaining access to the Cannon, Freeze stayed behind to bring his henchmen out of suspended animation and battle Batman and Robin.

Freeze was defeated and returned to Arkham Asylum, where he could be seen playing with dolls.

Mr. Freeze was one of the inmates left within his cells during Joker's breakout. While navigating the Asylum to get evidence from the escaped criminal's cell, they passed by Freeze in his cell. In the Handheld versions, Batman and Robin must fight Mr. Freeze and his henchmen.

After the Dynamic Duo left to investigate a break-in at Ace Chemicals, Freeze was released by the other escapees and left the Asylum. In the Open-World Gotham, he can be found at the Gotham Observatory. After being fought and defeated, Freeze can be purchased as a playable character, allowing him to be used in Free-Play Mode and the Open-World Gotham.

Mr. Freeze first appears on the Watchtower, where he uses his Freeze Gun to block of part of the space station. Alongside Plastic Man, Batman battled and defeated him, forcing him to flee. Some point after this, Mr. Freeze entered a fight with Killer Moth, resulting in his suit being damaged beyond use. Fleeing to Quard, he will enlist the player in helping create a new suit. After helping him, Freeze will be unlocked as a playable character.

The Batman Beyond version of Mr. Freeze is available as a playable character, via the "Batman of the Future" DLC pack.

Mr. Freeze appears in the outskirts near Arkham Asylum. He enlists the player's help to revive the Talons, after which he is unlocked as a playable character. 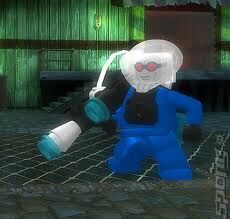 Mr.Freeze from LEGO Batman: The Videogame

Mr.Freeze and Scarecrow in LEGO Batman: The Videogame 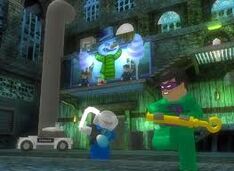 Mr.Freeze and Riddler in LEGO Batman: The Videogame 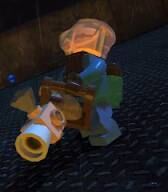 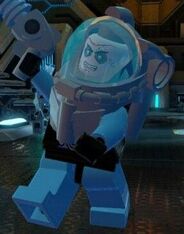 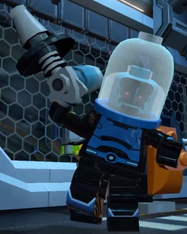 Mr Freeze (Batman Beyond) in LEGO Batman 3: Beyond Gotham

Retrieved from "https://batman.fandom.com/wiki/Mr._Freeze_(LEGO_Video_Games)?oldid=223774"
Community content is available under CC-BY-SA unless otherwise noted.