Mr. Freeze
Victor Fries was a petty thief, who one day made the mistake of crossing Batman during a diamond heist. Victor then fell into a freezing pod, and despite Batman's efforts, he could not save him and the criminal was presumed dead. However, Victor would later return as the wicked Mr. Freeze.

Victor Fries started out as nothing more than a simple thief. After a successful diamond heist he was suddenly pursued by Batman, who chased him to a cryogenics laboratory. In an attempt to reclaim the diamonds he dropped, he fell into a freezing pod with a live exposed cable. Despite the Batman's attempt to help Victor, it proved futile, and Victor was presumed to be dead.

Victor then became one of Gotham's most known criminals and went by the name Mr. Freeze. Freeze then attacks a ship and other locations around Gotham to steal the most rarest diamonds. He encounters Batman yet again but instead of defeat, Freeze manages to escape and continue with his crime spree. Batman then questions if he should keep up his crime fighting career since he creates criminals like Mr. Freeze. He soon released that it was Victors own fault he ended up like this and stopped his plan to be emperor of Gotham.

Mr. Freeze later works with Firefly in their attempt to have the city showed in a never ending winter. This soon fails when Batman defeats the two to save Gotham. Both villain's also end up turning on each other.

Mr. Freeze also rivaled Penguin in racing against each other to find and rob valuable treasure hidden under the sea. Freeze uses Ewan Fripp, Alfred's old friend, for locating the treasure. Mr. Freeze, in the end, fights Penguin for the treasure. Batman stops both of them and is arrested by the police.

Freeze is soon captured by Rumor in his attempt to kill him alongside Gotham's criminals. When Freeze is released, he tries to freeze Batman but accidentally freezes most of the criminals and then Batman opens the cell he is standing on, causing him to fall down. Batman then throws the Kabuki Twins onto Freeze to then lock up the cell leaving him and the others to get arrested alongside Rumor.

Freeze alongside other criminals such as Penguin, Bane and Joker later fight The Joining as well as assisting the police in their battle. Him and Gordon later share a mutual respect for each other.

Freeze is eventually hired by Lex Luthor alongside Bane, Black Mask and the second Clayface to kill Superman. Freeze attempts to stop him from breathing by freezing Superman. However Batman and Robin arrive and defeat him alongside the other villains.

Mr. Freeze tried on many occasions to rob Gotham. His robberies consist of usually diamonds or "ice", and liquid nitrogen to freeze the city solid. His ultimate dream having Gothan turned into his frozen empire, with him as its emperor. He also tried attacking the city after Batman was dead (hibernating for 1,000 years) but was stopped with the help of holograms of Batman and his neutralising formula. However, in this instance his appearance was changed into that of a man who had multiple mechanic "arms" from his lower half of his body and with no legs.

He later makes a cameo in Arkham being taken to his cell as Batman, Robin and Green Arrow search for Hugo Strange.

Mr. Freeze's personality is cold, aggressive, relaxed and calculating, and he seems to have an affinity for diamonds. His powers make him one of the Batman's greatest threats. This can be seen in his disregard of human life having no care for anyone but himself. In the not-too-distant future, he tried to steal a diamond by causing the jet carrying it to crash, reasoning the diamond, the hardest element on Earth, would survive, without considering the life of the crew on the plane. He seems to have respect for James Gordon when he shook his head in respect after saving him from a Joining attack.

Mr. Freeze, as a result of his accident, generates extreme cold around him. But with the special technology in his cryogenic suit he is able to shoot ice blasts from his hands at will, and project ice-waves around him. He often uses these abilities to create bridges at high areas and paths across the water. He also has created winter-wonderlands and several ice burgs with his powers alone. He also possesses a special heat rod, which he deemed the vibrating pick, that allows him to heat and shatter any ice he creates. Using this device, he can freeze enemies then shatter them to pieces. 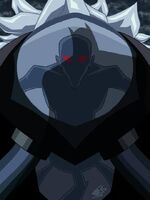