Nick was a mugger in Gotham City.

Nick and his partner, Eddie, mugged a tourist with his wife and son in an alley near the Monarch Theatre. When the man turned a corner Nick struck his neck with the butt of his revolver, knocking him unconscious. Eddie ran toward him and swiped the wallet from his back pocket while Nick threatened the woman and child, pointing the revolver in their faces. As they fled the woman let out bloodcurdling screams that echoed through the streets.

A little while later Batman tracked them to a rooftop where they counted the cash. Eddie began talking about an urban legend called "the Bat" that recently killed a hood known as Johnny Gobs. Nick scoffed at this but Eddie insisted he "shouldn't have turned the gun on the kid" (implying it would surely elicit the wrath of the Bat).

After squabbling between themselves, they realized Batman had been looming over them during their conversation. Nick shot Batman four times in the torso, knocking him to the ground. Believing him to be critically wounded, they began to leave, only to see the Bat had already recovered, striking the winged silhouette pose yet again.

Batman struck Eddie with a powerful kick, sending him flying through a wood door. Nick tried to escape, but Batman caught him with a roped-Batarang, put him over the edge of a building's roof, and ordered Nick to tell others about him.

Frightened out of his mind, Nick lingered at the crime scene with the critically injured Eddie. When he was finally arrested he told the GCPD that he had seen a giant bat, and was overheard by reporter Alexander Knox who then tried to get more information from Lt. Max Eckhardt. 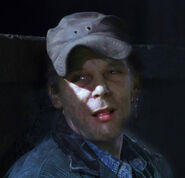 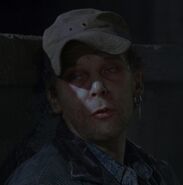 Add a photo to this gallery
Retrieved from "https://batman.fandom.com/wiki/Nick?oldid=212557"
Community content is available under CC-BY-SA unless otherwise noted.