Nick Gage was once a member of an organization called the Reapers, who unbeknownst to Gage, was really a gang of supercriminals. When Nick discovered this and attempted to quit, the gang killed his fiance in retaliation. Nick was devastated, and joined the police academy to atone for his misdeeds with the Reapers, and bring their kind to justice.

Nick made detective around the time Stephanie Brown became Batgirl,and after meeting on several cases, formed a bond similar to that Batman had with Jim Gordon and Barbara Gordon had with Jason Bard. Stephanie developed a crush on Gage, which became only more complicated when he started dating her mentor, Barbara Gordon, Oracle. Still, Gage assisted Stephanie on many of her cases during her tenure as Batgirl, and proved to be an invaluable ally, informant, and friend.

Gage and his team aid Batgirl on a case

Gage mourns the loss of his dead fiance 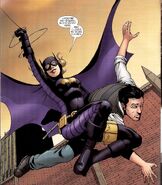 Nick being rescued by Batgirl
Add a photo to this gallery
Retrieved from "https://batman.fandom.com/wiki/Nick_Gage?oldid=66222"
Community content is available under CC-BY-SA unless otherwise noted.