Nightwing is an ally of Batman and Robin and helps out in the Dynamic Duo's crusade against The Riddler, The Penguin and The Joker. He plays similar to Robin as he can use all of his suits.

Nightwing returns in the sequel but is only available in the Hero Pack(DLC), he still has his own fighting style though he is unable to manually unequip the sticks (unless driving a vehicle). He has been largely downgraded to accommodate the large roster, such as his ability to equip different suits has now been replaced by just changing into the Robin character wearing the suit (of whom he shares his throw move).

Nightwing returns in the 3rd game as an unlockable character this time. He is unlocked by doing a certain amount of side missions in the batcave.Unlike the other games, Nightwing wears his New 52 outfit other then his classic blue outfit that he wears in the other games.

Nightwing appears in this game as a boss character and you can play as him in the free roam. For The Deluxe Edition and the game itself! 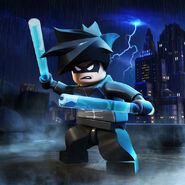 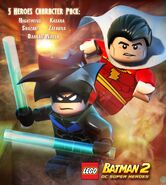 Add a photo to this gallery
Retrieved from "https://batman.fandom.com/wiki/Nightwing_(LEGO_Video_Games)?oldid=219242"
Community content is available under CC-BY-SA unless otherwise noted.