Batman: The Brave and the Bold
Nightwing (Dick Grayson) was the original partner of Batman until he became the sworn protecter of Bludhaven.

As a young boy Dick Grayson was raised in a family of Circus acrobats named the Flying Graysons. After the untimley death of his parents Dick Grayson was adopted by Bruce Wayne. Soon after being adopted he found Batman's lair and figured out that Bruce Wayne was Batman. Bruce then took him in and trained Dick into becoming Robin; Boy Wonder.

From Robin to Nightwing

As Robin, Dick became Batmans loyal sidekick in there fight against tyranny. Though as the years went by, Robin began becoming fed up as Batman's sidekick and left to protect another town known as Bludhaven on his own. One incident lead Batman to join his former partner in dealing with the vengeful Crazy Quilt. During this time, Dick began to air out his frustrations towards Batman, though it's unknown if he heard him. The two defeated Quilt and the two went on another case... with Robin playing the sidekick once again. After teaming up with two other sidekicks, Aqualad and Speedy; Robin defeated the vicious assassin Talia al Ghul and decided to move on and continue his career as the superhero known as Nightwing. 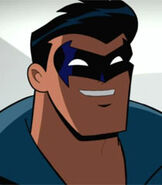 Add a photo to this gallery
Retrieved from "https://batman.fandom.com/wiki/Nightwing_(The_Brave_and_the_Bold)?oldid=210689"
Community content is available under CC-BY-SA unless otherwise noted.