At some point in Nora's life she met Olympic decathlete and scientist Victor Fries and fell madly in love with him. They eventually wed and were both deeply devoted to each other. Victor gave Nora a special snowflake necklace that she wore around her neck.

Nora later developed a rare disease that was called MacGregor's Syndrome, and Victor cryogenically froze her until such a time that a cure could be found. While in her coma she was placed standing in a tank of fluid. During a cryo-experiment, Victor fell into a tank of cyro-fluid, which made him only able to survive in sub-zero temperatures. Victor built himself a special cryo suit, made a Freeze Gun, and called himself Mr. Freeze. Freeze hid out at the Snowy Cones Ice Cream Factory and moved Nora's cryo-tank there. In need of further funding he began a crime spree of stealing diamonds. He eventually went mad during this quest for Nora, turning ruthlessly cold toward anyone in his way. He would freeze people where they stood with his weapon and leave them to die on a regular basis.

He eventually devised a genocidal scheme to build a special freezing engine to freeze Gotham City. Freeze would hold the city ransom until he would get the billions that he needed to complete his research in order to find a cure. Freeze kept Nora's tank in a secret room and would often to talk to her tank.

After he was captured by Batman, Freeze was imprisoned at Arkham Asylum, was upset about his separation from his wife, and carved an ice statue of her in order to get some solace. He was soon rescued by Poison Ivy and Bane. They all returned to Freeze's hideout to retrieve his diamonds, weapons, and Nora. Freeze got his belongings while Bane fought Batman and Robin with Ivy using her mind control dust to turn them against each other. After she got Batman and Robin to fight each other, Ivy escaped with Bane to the room where Nora was kept.

Ivy unplugged Nora's cryo tank and left her to die as she saw her as an obstacle between her and Freeze. Freeze took refuge at Ivy's hideout at the Turkish Bath House. When Ivy and Bane returned, Freeze demanded to know where Nora was.

Ivy told Freeze that Batman had killed Nora. At first, Freeze didn't believe her, but when Ivy showed him Nora's snowflake necklace, he was deeply grieved, enraged and swore vengeance upon the Dynamic Duo. Ivy urged him to do more than destroy them, but also kill the society who made them what they were.

Freeze then decided to use his special freezing engine to freeze Gotham and then the world forever.

Ivy said that when Freeze froze the world, her new breed of mutant plants would take over — which she had planned to do all along by using Freeze as a pawn for her evil ends.

After he was defeated by Batman, Freeze was shown a recorded confession of Ivy saying that she pulled the plug to Nora’s cryo tank, but Batman found and restored her, and Nora was still frozen alive and waited for him to find a cure. Batman asked Freeze for a sample of the cure of Stage One of MacGregor's Syndrome to help a "dying friend" and told him that the man that Nora still loved was still inside him.

After he was touched by those words, Freeze gave Batman two vials that contained the antidote. For that gesture, Batman told Freeze that Nora would be taken to the lab at Arkham, where he would be able to continue his research.

When Ivy was defeated and taken to Arkham, she met Freeze who then promised to make her life a living hell for what she did to Nora and her deceit.

The mannequin of Vendela Kirsebom Thomessen in the water tank was created by Rick Baker's Cinovation company, much like all the frozen victims seen in the film.

Shooting the honeymoon home movies
Add a photo to this gallery 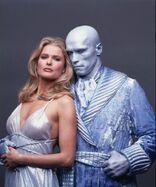 Add a photo to this gallery
Retrieved from "https://batman.fandom.com/wiki/Nora_Fries_(Vendela_Kirsebom_Thomessen)?oldid=214362"
Community content is available under CC-BY-SA unless otherwise noted.