"Darling, I've gotta get you to the church on time."
―Joker[src]

Gotham Cathedral was a condemned church in Gotham City. The highest point in the city's skyline at 800 feet tall, it is instantly recognizable towering over all other buildings.

The old cathedral was located behind the Flugelheim Museum, at the end of Broad Avenue. The Joker chose the belltower to make his final stand against Batman and the police.

Early in his career, Batman frequently made scaling the cathedral part of his routine. Perched up out the belfry walkway, he blended in with the building's gargoyles and grotesques.

One night Batman heard a scream echoing from an alley in Gotham Square. After investigating he found that a mugging had taken place and tracked the culprits, Nick and Eddie.

When Joker hijacked Gotham's 200th Anniversary Parade, the corner by the cathedral was the starting point of the parade down Broad Avenue. The Joker destroyed the Batwing after the festival, crashing into the steps of the church. Distraught, Vicki Vale quickly made her way to the wreckage to find her lover. Joker noticed her and escorted Vicki into the cathedral at gunpoint, as a hostage. Joker radioed his goons, alerting them to bring his helicopter as planned. Upon looking up at the towers, Joker told the pilot to wait about ten minutes before starting up.

Like many other buildings that followed the path of the parade, Joker Goons were planted at the cathedral as well. The Gymnast Joker Goon also traveled to the top of the cathedral at an unknown point in time, possibly when Joker ordered his men to clear the streets for his confrontation with the Batwing.

"It can be truly said, that I have a bat in my belfry. Shall we dance?"
―Joker[src]

Batman made his way up the stairwell, when the Joker reached the belfry he used his acid-squirting boutonnière to drop a massive bell down the stairwell. After destroying most of the wooden staircase it also blocked entry from the police, who were now swarming the area. Batman barely made it up the stairway to rescue Vicki as well as avenge his parents' murder. The battle resulted in serious damage to the cathedral and it was likely torn down when City Hall was moved to the Gotham Plaza area.

In the preliminary Sam Hamm script Batman used a ultrasonic device in his belt to summon bats in the belltower, swarming the Joker, causing him to fall. There was also a time bomb in his belt, just before it explodes he throws into rope ladder of the Jokercopter.

Anton Furst found inspiration in Gaudí's cone-shaped cathedral in Barcelona, combining it with elements of a Japanese fortress.

Vicki Vale and the goons were added to the belfry scenes at the behest of Jon Peters after he read a Wallstreet Journal article about the film, concerned with making Batman seem tough. Joker's defeat was changed to technological limitations, so the idea of the bola launcher tethering his leg was conceived. In the Warren Skaaren shooting script, the Batsignal was originally projected on the cathedral, rather than the sky. This done in tribute to the more plausible signal in Frank Miller's 1986 Dark Knight series. Batman was shown jumping off a rooftop with the cathedral signal in view behind him. This was at least partially shot before being replaced with new ending scenes. In the Jerry Ordway comic adaptation this is how the signal is projected.

The cathedral became such a popular location and a recognized Batman landmark that similar cathedrals started appearing in comic books and other Batman media.

The cathedral bells were also used as a noted sound that related to Batman's presence; most notably described in The Return of Bruce Wayne comic event.

Gotham Cathedral made an appearance in the Joker story of LEGO Batman: The Videogame. The Joker and his group planned to fill the cathedral with Joker Gas and blow it up in order to to flood Gotham with it.

In Batman: Arkham Origins, a cathedral was used by Black Mask as a home to his drug operations after the Joker took over the Steel Mill. After he destroyed the various drug canisters that were spread across Gotham City, Batman defeated Black Mask's armed henchmen inside the church, and later on, captured Sionis when the latter confronted him at the church and left him for the GCPD.

A cathedral later reappeared in Batman: Arkham City. In it, a cathedral was one of the locations within Arkham City. It was converted into a medical center, which was also where the Joker's gang, led by Harley Quinn, kept medics as well as former members of the Arkham Asylum Security Force hostage. Joker also utilized one of his "mannequins" to man a sniper rifle in an attempt to assassinate Catwoman at the belltower. Batman freed the hostages and tracked down the Joker so that he could interrogate him about Protocol 10, as he was believed to be working with Professor Hugo Strange. However, Joker anticipated that possibility and rigged the top of the Cathedral to explode, and Batman just barely escaped. The Riddler later invaded the cathedral and kidnapped the medics and the former Arkham Asylum Security Force as part of his revenge plot to Batman for his earlier defeat in the Joker's takeover of Arkham Asylum. Eventually, Batman defeated the Riddler and the medical staff was safe inside the church. Vicki Vale later interviewed the incarcerated and demoted Mayor Quincy Sharp in regards to Arkham City.

A cathedral appeared in the massive multiplayer online game, DC Universe Online as a location in the Old Gotham District.

The Gotham Cathedral appears in the episode Rise of the Villains: Tonight’s the Night. 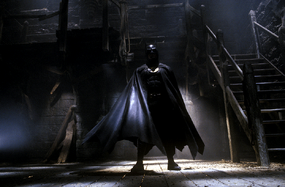 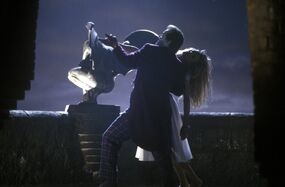 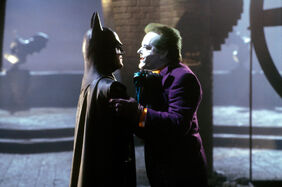 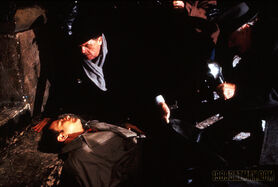 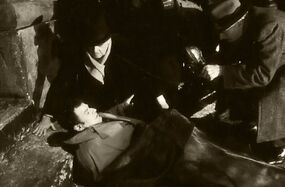 Conceptual illustration for the Batsignal projected on the cathedral by David Russell.

Behind the Scenes photos 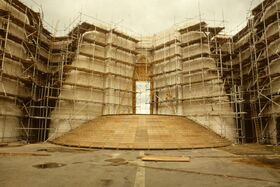 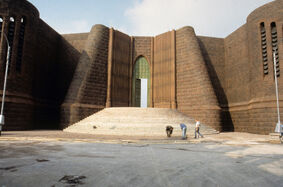 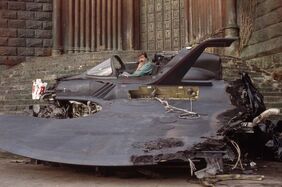 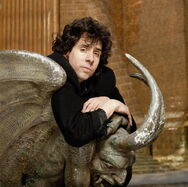 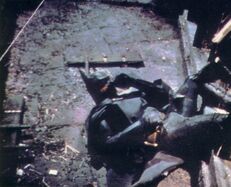 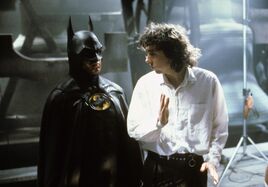 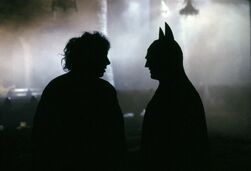 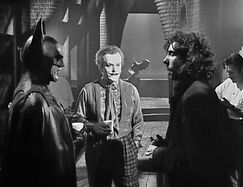 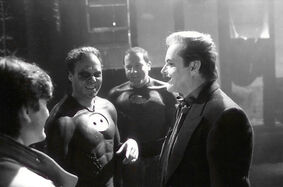 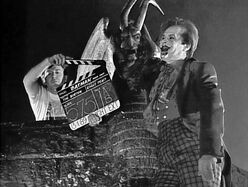 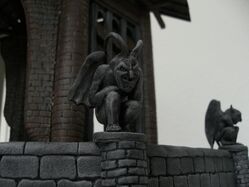