Oracle was an outside contact to Batman, who filled him in on what was going on. Oracle did not physically appear in Arkham Asylum or Arkham City, until Arkham Knight where she did appear. Although she did speak directly to Batman in every game.

Barbara Gordon was the daughter of GCPD Commissioner, James Gordon. Barbara was forbidden by her overprotective father from joining the GCPD. Instead, she took on the identity of Batgirl and was a crime-fighting partner of Batman's for years. But that all ended when the Joker shot her through the spine. Paralyzed from the waist down and confined to a wheelchair, Barbara adopted the new identity of Oracle, and aided the Dark Knight with her computer expertise, and provided Batman with a constant stream of information in the field to aid in his battle against crime. Following her marriage to Tim Drake, she was known as Barbara Gordon-Drake.

Unlike her father, Barbara believed Batman to be a hero, was fully aware of the corruption within the GCPD, and repeatedly cited the system as "broken".

Barbara was first seen arguing with her father about Batman, whom Gordon claimed was "The worst kind of criminal: the kind who thinks their actions are justified." Barbara maintained a strong stand on her position, and angrily told Gordon that the system was broken before she stormed away. Gordon was frustrated and walked off.

Batman, who was looking for the GCPD's Server Room in order to access the National Criminal Database so that he could learn more about the Joker, found a startled Barbara on her laptop when he entered. Batman told Barbara to take it easy and began to hack the system. Barbara impressed Batman by explaining to him the technicalities of the procedure involved in hacking the servers, to which Batman responded by warning that the kind of knowledge that Barbara possessed could get her into trouble.

Barbara informed Batman that the telecom wires of the GCPD ran through the sewers underneath the building. Before Batman left, Barbara asked him why he did what he did, and Batman said that he made a promise. The police suddenly threw a Smoke Bomb into the room, which allowed Batman to quickly escape. The officers asked Barbara who she was talking to, and Barbara, clearly frustrated, claimed that she was voice-chatting on her laptop.

Barbara later hacked into Batman's communication device, and informed him that the Penguin had arms caches that were located at criminal-guarded spots around Gotham City. She requested that Batman use his newly-acquired Disruptor to render the containers useless, as the police were incompetent toward the case. Batman was able to take care of the job, and Barbara was very grateful.

Barbara was present with her father at Blackgate Prison as they watched the police secure the area in the aftermath of the events that happened that night, and Gordon explained how Batman gave the city something to believe in.

In Enigma's Extortion File for James Gordon, Barbara could be heard talking to Gordon about how the police were near their house. Gordon explained to Barbara how to use his police radio, which contained frequencies that were indicated to be communication channels that were used by the corrupt cops.

Batgirl: A Matter of Family

After Batman foiled the Joker's latest scheme and transferred him to Arkham Island via the Batmobile, Oracle contacted him, heard of the events prior, and stated that the Joker was his third 'big gun' in the last month, following Victor Zsasz and Scarecrow. Batman discussed his suspicions with the similarities and convenience surrounding the three captures with Oracle before he arrived at Arkham Asylum.

Shortly after Batman had arrived with the Joker at Arkham Asylum, the Joker was escorted by a team of armed and armored security guards to the Holding Cells, where he broke free. The Clown Prince of Crime killed a guard and a doctor in the area before he freed all of the prisoners who were housed in the Holding Cells. While Batman fought them off, the Joker ran amok through the Intensive Treatment Center, and killed the asylum guards in his path. Batman followed him, leaving Commissioner Gordon, Barbara's father, inside a reception area guarded by Frank Boles, a decorated Arkham security guard. As he arrived at the Patient Pacification Chamber, Batman contacted Oracle via his communications system. He assured Barbara that her father was safe. That proved to be wrong, however, as Boles was secretly in the Joker's employ and he clubbed Gordon with a nightstick, kidnapped him and regrouped with the Joker's partner-in-crime, Harley Quinn. Batman informed Barbara of this calamity, but she remained calm despite her fears. Batman contacted her again, and told her that he was going to the office unit where Gordon had been to see if he could pick up a trail. Batman isolated his cowl's vision to detect traces of Boles' favorite tipple in the air and follow him. Batman contacted Oracle again after he saved Henry Smith, an Arkham guard from a falling elevator that was cut by Harley. ("Harley Quinn tried to slow me down. Dropped an elevator on me.") Barbara asked if it worked, to which Batman responded to with a chuckle: "Of course not."

Batman also found that the Joker's Henchmen had gotten control of guns and shot many of the asylum's guards. She helped Batman use his cowl's vision to detect armed henchmen, who appeared in red. The Riddler later used the same "primitive communications system" that Batman used to contact Oracle to assign him the challenge of solving 240 challenges across Arkham Island. Upon arriving in Arkham East, Batman contacted Oracle and asked her to shut down the Batmobile's countermeasure system when Harley and several escaped inmates thrashed the Batmobile with pieces of piping, since if she still was holding Gordon captive, he would get hurt as well. Oracle disabled the security system for Batman, then was called on by Batman again after he arrived in Arkham North. He found Gordon's pipe at the scene and Barbara revealed that she had once given it to him as a birthday present and that he would never leave it. Batman used this piece of information to deduce that Gordon was leaving him a trail to follow. Batman was correct, as Gordon had left clumps of tobacco in his wake for him to follow. Batman later tracked Gordon to the Medical Facility in Arkham West. Batman, at one point, was exposed to the Scarecrow's Fear Gas and began hallucinating. He found the Commissioner's dead body slumped against the wall of an empty hallway outside the Morgue.

However, when the Dark Knight tried to contact Oracle to inform her of her father's death, Barbara's voice responded to Batman in his drugged state, and disconnected him. After he recovered from the effects of the Fear Gas, Batman went back to where he seen Gordon's corpse, only to find it was really just another Arkham security guard that Scarecrow had killed earlier. Oracle remained Batman's radio contact for the rest of the Joker's takeover. On one instance, Batman called her as he was going into Killer Croc's Lair to retrieve an antidote to the Venom-based drug, Titan. She told him that it sounded like a suicide mission. When she asked about Croc, Batman responded that Croc was just an animal and that animals needed the right traps and bait. Batman eventually detonated Explosive Gel under the ground as Croc lunged for him, and dropped the villain into the Gotham River below. After the Joker's defeat, Barbara called her father up as the GCPD retook control of Arkham Island. He told her that doctors were treating the injured and that most inmates were back in custody. Gordon also informed his daughter that the Joker's men were recovering from the effects of the Titan that the Joker had injected them with. Barbara asked how he was, and Gordon told her simply: "I'll survive." He then promised to see her later that night.

Oracle appeared in a few issues of the Arkham City tie-in comics. At one point, Oracle was attempting to search for Hugo Strange alongside Nightwing. She also informed Batman of Vicki Vale's disappearance when Vale was kidnapped by The Mad Hatter.

In the issue "Beloved", Barbara expressed her dislike of Talia al Ghul, and claimed that her presence had jeopardized the mission. Bruce said that it was a personal matter and also revealed that this was why he let Barbara and Dick date behind his back.

During the first part of the game, Alfred was Batman's main contact for information. Later, Oracle contacted Batman after he defeated some of the Arkham City Prisoners at the Museum. She remained Batman's main radio contact for the remainder of the game, and helped him find clues to apprehend Deadshot, the Identity Thief, and even the Riddler. Oracle kept Batman informed on what was happening outside of Arkham City, and was eventually able to deactivate Protocol 10 at his request. Similar to the previous game, Oracle was unseen, but remained a prominent character throughout the game.

In an alternate ending, if Catwoman chose to leave Arkham City and not help Batman, Barbara sent out a distressed radio call. She stated that Wayne Manor was destroyed, that Commissioner Gordon and the others were dead, and finally revealed that the Joker had "won." Luckily, the game was reversed back, and Catwoman was able to make the right decision to go and save Batman.

After Batman was taken prisoner by Harley Quinn in the secret base that she had set up, Oracle sent Robin two days later to find him and rescue him. When Robin arrived, he told her that Quinn was preparing for a siege of some kind, but she said only to find Batman and then leave immediately.

When Robin entered the secret base and found Quinn, he told Oracle that he was seeing Quinn with a group of captured GCPD officers. Shortly after that, Robin found Batman's Utility Belt and Oracle asked him if he had made any progress. Robin said he was getting close, and later contacted Oracle to say Batman that was trapped, but was in some kind of meditative state.

Batman was later rescued and Quinn was also defeated.

At the beginning of the game, Barbara remained in the Clock Tower despite her telling her father that she was leaving Gotham with the rest of the citizens following Scarecrow's threat. Although Oracle assisted Batman in the initial stages of his investigation into the identity of new foe, the Arkham Knight, she was subsequently captured by the Knight's forces. Batman attempted to track Barbara down, but, by the time that he found her in an old safehouse of Crane's, she had been exposed to Crane's new Fear Toxin that caused her to see Batman as an unspecified monster, which resulted in her committing suicide out of terror at what the "creature" could do to her.

However, that was later revealed to be an illusion that was created by Batman's own exposure to Crane's toxin, with Barbara later revealed as alive and was used by Crane as a hostage to force her father to shoot Batman. Although Gordon obeyed the order, he deliberately shot Batman on the heavily-armored Bat Symbol on his chest, which allowed Batman to recover in time to save Barbara for real. At the conclusion of the game, it was revealed that Barbara was about to be married to Tim Darke, with her father being Tim's best man and walking her down the aisle. 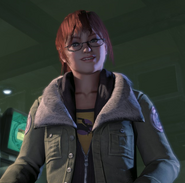 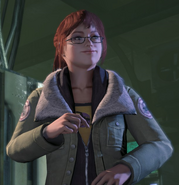 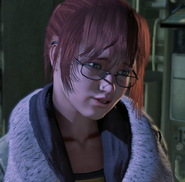 Oracle Biography Arkham Asylum
Add a photo to this gallery

Oracle Biography Arkham City
Add a photo to this gallery 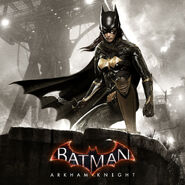 Add a photo to this gallery
Retrieved from "https://batman.fandom.com/wiki/Oracle_(Arkhamverse)?oldid=214647"
Community content is available under CC-BY-SA unless otherwise noted.