Birds of Prey
Oracle assists Huntress while she's out in the field.

Once Batman's protegé, Batgirl (Barbara Gordon), was caught in the crossfire in the war between Batman and the Joker. She fought crime a different way as Oracle, master of the cyber realm and trainer to heroes. After she took in Helena Kyle as a child after her mother was murdered, Barbara trained Helena to become New Gotham City's protector. Dr. Harleen Quinzel discovered Barbara's dual identity, after she manipulated Helena into revealing all of her secrets. Occupying Barbara's base of operations, the Clock Tower, Quinzel killed Barbara's boyfriend, Wade Brixton. In battle, Barbara managed to overpower Quinzel and attempted to exact revenge by killing her, but was brought back to her senses by Helena.

﻿ Barbara Gordon was played by American actress, Dina Meyer. Instead of the manual wheelchair that Oracle used in the comics, she used an electric-powered wheelchair in the series. The chair was once upgraded by Barbara to be controlled by her hands via special center, rather than using the joystick. Rather than being a librarian or a computer expert, Oracle in that series was a high-school English teacher.﻿ 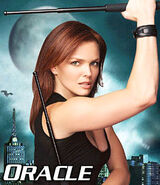 Add a photo to this gallery
Retrieved from "https://batman.fandom.com/wiki/Oracle_(Dina_Meyer)?oldid=217898"
Community content is available under CC-BY-SA unless otherwise noted.