The monkey was seen with his master.

He escaped after his master was arrested and relayed a note from the Batman that detailed that Penguin's plan to capture the first-born children of Gotham City had failed. That infuriated the Penguin, but nonetheless, the monkey stuck around as the keeper of the key to Max Shreck's Cage. Shreck got the better of the monkey, tricked him into coming close, and he snagged the key. 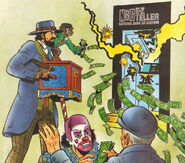 Batman Returns: The Penguin's Plot
Add a photo to this gallery
Retrieved from "https://batman.fandom.com/wiki/Organ_Grinder%27s_Monkey?oldid=215228"
Community content is available under CC-BY-SA unless otherwise noted.