"What do you think made him what he is, Batman? Childhood trauma? Some kind of breakdown? He never speaks about it."
―Penelope Young[src]

Dr. Penelope Young was was one of the chief psychiatrists at Arkham Island. She was also working on Arkham's newly developed Titan project. Dr. Young and her exploits within the project would be revealed to be powered by the machinations of the Joker, who manipulated the entire operation for his own ends to destroy Gotham and finish his battles with Batman.

Penny Young was always a brilliant student who was prepared to do anything to advance professionally. She has built up a reputation for being a cold, calculating woman, focused only on the project at hand. She was hired at Arkham Medical by Warden Quincy Sharp to head up the city Research Department, and to finally restore to sanity the more deranged of Gotham City's super villains.

Batgirl: A Matter of Family

Around the same time she was employed at Arkham Asylum, Doctor Young also continued in her private practice and prescribed antibiotics to her patients, one in particular being Katie Burke, a young girl previously diagnosed with cancer and the daughter of Edward Burke, a wealthy oil baron. Burke was planning on constructing an amusement park atop one of his oil rigs off the coast of Gotham City in hopes of uplifting his daughter's spirits, using Katie's drawings as inspiration to design the SeaGate Amusement Park.

However, the truth later turned out to be far more sinister, as Burke's motivation was manipulatively planted by the Clown Prince of Crime himself, Joker, as part of a particularly gruesome set of plans that comprised a violent campaign against Batman's allies. Behind the scenes, Harley Quinn and Joker had been impersonating a therapist and doctor (using the alias, Jack White) respectively under the guise of helping Burke cope with his tragic circumstances and manipulated the man into retiring and work full-time on constructing the park, which Joker planned to convert into a base of operations as part of his plans to target Batman's network of allies.

Joker referred Burke to Doctor Young when Katie's condition worsened and advised Dr. Young, who he had also been manipulating for some time, to prescribe Katie alternative medicine. Unknown to Burke, the antibiotics prescribed to Katie were experimental, with Dr. Young seeing the ill girl as a useful test subject to better perfect her research into developing new medication for her private practice and even potentially use it as an asset for other operations she was conducting at the asylum, unknowingly being manipulated by Joker the whole time under the same alias as well.

As a result of these alternative drugs, Katie ultimately worsened in her condition and died of a drug overdose after Joker urged Burke to triple her dosage. The villain them convinced the unfortunate man that Katie's death was Burke's fault, hand over the lease for the park for his own use, and to commit suicide via pills he supplied to him, promising Burke that they will be painless. When Burke ingested them however, it was revealed that they were laced with Joker's signature laughing toxin, as he died painfully and slowly within the office of his own park.

When Dr. Young learned the truth about Jack White years later, it can be assumed that she began to understand the magnitude of her role in Katie's horrific death, possibly contributing to her change of heart when she attempted to cancel all projects formed under the manipulation of Joker.

As head of the Asylum's Research Department, Dr. Young came up with project Titan. The aim of Titan was to increase the strength of much weaker patients so they could undergo the more intense methods of treatment. Dr. Young received financial backing from a Mr. Jack White who also backed the transfer of Bane, under the alias of Patient X, from Blackgate Prison, allowing her to extract the venom from his body and use it as a compound for her own Titan formula (Bane referred to her as "bruja" for this, Spanish for witch).

Dr. Young held her research developments in the Botanical Gardens, where she used a plant-based hybrid to create the formula, testing her first version of it on another prisoner transferred temporarily to Arkham from Blackgate, mutating him into a monstrous beast. During various interviews with her patients, she concluded that the Joker would be the perfect candidate for the Titan project, before finding out, during another interview, that the Joker was in fact Jack White himself and pulled the strings to release Bane from Blackgate, leaving to GCPD to believe he had escaped, concocting a plan to use the formula in order to create an army of Titan monsters. After this discovery, Dr. Young transferred the money back to the Joker, and refused any more funding. The Joker thus allowed himself to be captured and brought back to Arkham Asylum by Batman, so he could start a riot, then complete the Titan project himself.

Young appeared nervous when the Joker was returned to Arkham. She waited in the Intensive Treatment Lobby as a security team of armed and armored guards took the Joker to the Cell Block Transfer Corridor, accompanied by Batman. As the guards escorted the Joker past Young, two guards stood on either side of her, aiming assault rifles at the Joker should he attempt to make a lunge for her. One of the guards, Maria Andrade, ordered Young to keep behind her. The Joker gave many shrewd and sinister remarks to Young, who appeared pale. As the Joker was being taken back to his cell, Dr. Young left the area, telling Armbruster to take her back to her office in the Arkham Mansion. After his breakout, the Joker called Dr. Young, demanding that he get his monsters, after being refused he claimed that if she didn't, it wouldn't be "funny".

Eventually, the Joker initiates his takeover of Arkham. He has his thugs track down Young, with orders to bring her to him alive. Young was captured while carrying out her normal duties in the X-Ray Room in the Medical Facility. Armed inmates led by the Joker's henchgirl Harley Quinn invaded the Medical Facility to round up all the doctors, Young among them. Thugs dispatched to the X-Ray Facility shot the asylum security guards and found Young. They surrounded her in a locked office to interrogate her. Batman saved her, but she immediately headed to the Arkham Mansion, with guard Aaron Cash as backup. She does not tell Batman she is heading there to find her notes containing the Titan formula, which Joker seeks. Batman soon learns of her actions and tracks her down.

The Dark Knight deals with several inmates attempting to break into Young's office, finding that the Joker had captured Aaron Cash, but Young had managed to flee to her office, retrieve her notes, and then escape, pursued mercilessly by the Joker's hordes. She, finding that most of the Arkham Mansion is now under the Joker's control and that most of the security guards are dead or incapacitated, flees to the mansion library, which the Joker's thugs have not entered yet. Brushing by two asylum guards at the door, Young fled to the lower level of the library, surprising a guard named Bill along with an unidentified Arkham orderly.

The thugs on her heels, meanwhile, wasted no time in killing the two security guards at the door and storming the lower level of the library. Bill tried to defend her, but without success. He was eventually overpowered and the three were inevitably taken prisoner, but not before Young managed to hide her notes. The inmates left Bill and the orderly tied up in the library and took Dr. Young to the Joker, who is displeased that the notes are still missing. Meanwhile, Batman invaded the Arkham Mansion, defeating many of the Joker's thugs. He manages to find her notes and destroy them, and saves Young from Victor Zsasz, whom the Joker has ordered to torture the Titan Project information out of her, which he succeeded in doing before being incapacitated by Batman.

Soon afterwards, however, Young is killed when she set off a bomb the Joker planted within the Warden's office safe. She died a woman with a destroyed reputation and with many villains after her, including Bane, Poison Ivy, Harley Quinn, the Joker, and Mr. Zsasz. Young later is seen in the final Scarecrow hallucination. When Batman is affected by the Scarecrow's fear gas upon his second trip to the Intensive Treatment Center, he hallucinates a horrific take on the night's earliest events: The Joker is instead capturing Batman to return him to Arkham Asylum, and Harley Quinn is the new warden. Armed Inmates replace the security guards, with Zsasz wheeling Batman through the Intensive Treatment Center on a handcart. Young, Warden Sharp, Commissioner Gordon, Aaron Cash, and the asylum guards are instead the real prisoners, and the Scarecrow has assumed Young's position as doctor and head of research at Arkham in this latest nightmare.

For some games that were exclusive, they had Dr. Young's notes about some of the patients that were in Arkham that were both either inmates of either Arkham or Blackgate. There were Riddler question marks from the Riddler, on Clayface, Mad Hatter, Scarecrow, Penguin, and Tweedledee and Tweedledum pages. She didn't get pages of Maxie Zeus, Hugo Strange, Catwoman, Hush, Killer Moth, and Prometheus. Hush and Hugo Strange were probably doctors with little problems unlike Harley Quinn and Scarecrow. Catwoman is known for escaping easily. Killer Moth is obviously known for identity theft. Prometheus was wanted on the run for a long time due to the fact of the old wanted poster. 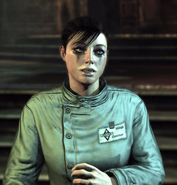 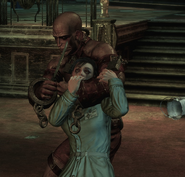 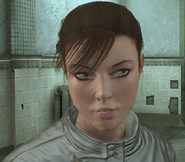 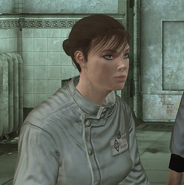 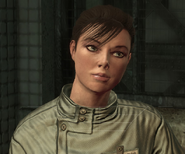 Add a photo to this gallery
Retrieved from "https://batman.fandom.com/wiki/Penelope_Young?oldid=218287"
Community content is available under CC-BY-SA unless otherwise noted.