The commandos were pets of Oswald Cobblepot that became pawns in his fight against Batman. The engineers in the Red Triangle Gang were seen constructing this equipment in the Penguin's office while also drawing up the Batmobile blueprints, before he decided to run for mayor.

They had special radio-control helmets that the Penguin had placed on them in order to use them as suicide bombers, as they would would be launching missiles at buildings all around themselves. The Poodle Lady directed the Penguin Army from her igloo control station in the Arctic World. Thin Clown seems to have assisted in the final preparations of this operation.

Eventually they all converged at Gotham Plaza, but Batman jammed their control system so that they would not launch their ballistic missile payload. Alfred was able to redirect them back to the abandoned zoo from a computer console in the Batcave. After Batman arrived and landed his Batskiboat on top of Cobblepot's fleeing vehicle, he tricked Penguin into using a hand-held signal device that caused the Penguins to fire their rockets in the zoo. It also released a swarm of bats from the skiboat that caused Penguin to step backwards into the Arctic World skylight where he fell to his death. As Batman rushed after him, he looked back the large structures being destroyed by the penguins behind him before zip-lining down into the exhibit interior. It's likely some of the penguins died amidst the chaos.

The penguins that were used in Batman Returns were Blackfeet and King Penguins. Costumed actors portrayed the Emperor Penguins. Stan Winston's studio built many robotic penguins for the finale of the movie.

This concept was likely inspired The Penguin on Parole story from Batman #38, in which he strapped explosives to a small army of living penguins.

There are numerous other stories where Cobblepot uses exploding robot penguins to destroy his enemies. A robotic penguin is often displayed in the Batcave's trophy room. 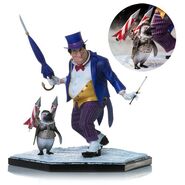 Add a photo to this gallery
Retrieved from "https://batman.fandom.com/wiki/Penguin_Commandos?oldid=220634"
Community content is available under CC-BY-SA unless otherwise noted.