Poison Ivy is an enemy of Batman and villain in the LEGO video games. A criminal based around plants, Pamela Lillian Isley uses mutated plants and natural toxins in her criminal activities. Ivy's goal is mainly to see plants become the dominant species, going to deadly lengths to see this take fruition.

During the mass breakout from Arkham Asylum, Poison Ivy teamed up with the Riddler to escape. Along with Two-Face, Mr. Freeze and Clayface, she agreed to help him rob Gotham Gold Reserves, providing her mutated fine seeds to climb the island's cliffs.

After their truck was destroyed in a chase with Batman and Robin, Poison Ivy helped Riddler and Two-Face escape the Dynamic Duo, using her mutated vine seeds. Requiring to get more, she and Riddler broke into the Botanical Gardens, fighting their way through staff, GCPD and security. After obtaining them, Ivy was confronted by the Dynamic Duo, who had followed them by tracing the source of the vine seeds. While Riddler managed to escape, she was defeated by Batman and Robin. Ivy was later returned to Arkham, where she could be seen tending to her cell's plants.

Poison Ivy was one of the villains freed by the Joker and Lex Luthor to cover their escape. Teaming up with Bane and the Penguin, she tried to escape with them on Bane's Mole. However, their path was blocked by Batman and Robin, forcing them to unsuccessfully tunnel out.

Later, Ivy is able to escape Arkham when the villains cause an even larger breakout, shortly after Batman and Robin leave. In the Open-World Gotham, she can be found at the Gotham Botanical Gardens. After being defeated, Ivy can be bought for use as a playable character, both within Free Play and the open world. 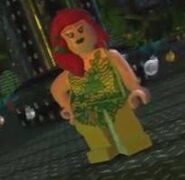 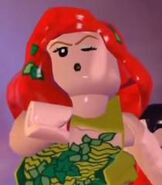 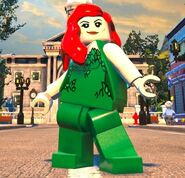