Pamela Isley is a charming, clever and quick-tempered schemer, known to go to extreme measures to get her environmental messages heard. After a tragic accident transforms her into the half-human/half-plant that she names Poison Ivy, she is able to control anyone who gets a whiff of her plant pheromone "spores".

Pamela Isley is still a high school student (15) and obsessed with nature. (She is also found to be the best friend of Barbara Gordon.) Everything or anyone that harms the environment is an enemy to Pamela.

In order to carry out her plans against the industries that are harming plants in Gotham City, Isley hires Temblor to do her dirty work (since Isley running around with her friend Barbara Gordon would certainly turn too many heads). After Temblor's payment for his jobs doesn't come through, and he learns his "boss" is really a teenage girl using a voice scrambler, he attempts to get rid of the annoyance in his life. During the fight, The Batman shows up to detain Temblor, but before he can completely save her, Isley is exposed to a powerful dosage of plant growth accelerator ("Chloro-Mulch") and her transformation to Poison Ivy begins. Pamela is placed in an ambulance and then transported to a hospital. During the trip, Ivy's eyes start to glow and mutated plants ambush the vehicle. The plants then break Ivy's chains and abduct her. Ivy is placed in a net of petals and cocooned. The cocoon reappears within a greenhouse where Ivy's metamorphosis is being completed. Once the transformation is finished, the cocoon cracks open; revealing Poison Ivy. Isley's appearance is dramatically altered as her clothes are replaced with plant material, her hair resembles roses, her feet are bare, and her skin color is given a slight green tone. Ivy then realizes her power as she regains her focus and plots her revenge.

For her first act, Ivy captures James Gordan and attempts to take his life; before she can, The Batman shows up. She quickly puts him under her control with a mind-controlling dust. Batgirl shows up to help free Gordon but finds herself overpowered by The Batman and Poison Ivy; despite this, Batgirl's able to snap The Batman out of the mind control and together they take down Ivy.

A period of time later, the mayor planned to tear down Gotham Park, and its plants in order to build a new children's hospital. His decision was despised by many people - including Poison Ivy. So, she hit Gotham City's most powerful citizens and infected them with a flower that put them in plant pods stasis them and infecting them with a virus that made them think that they were enjoying nature. She also managed to capture Penguin. Meanwhile, plant clones took their place in the real world. Batman, however, accidentally killed Penguin, only to find that it was not Penguin at all, but his plant double. After rescuing Batgirl, they found Poison Ivy, and her plans were foiled.

She had a cameo appearance in "Rumors" where she is one of the captive victims of Rumor. After getting free she and the villains fight Batman but is taken down by Robin who rides on Man-Bat

Also, in "The Batman/Superman Story" she is captured by Lex Luthor, who is able to obtain from her mind-controlled spores that were laced with Kryptonite dust so he can control Superman. She was later freed from Luthor, but imprisoned with him and Mercy after his defeat. 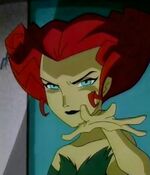 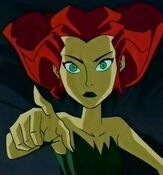 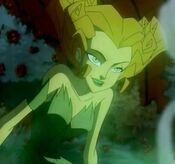 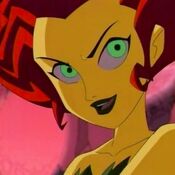 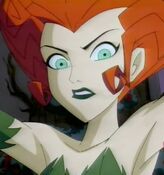 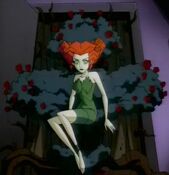 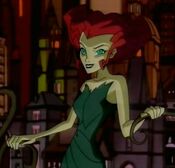