Batman Wiki
Register
Don't have an account?
Sign In
Advertisement
in: Villains, Bureau of Missing Villains, Deceased Characters,
and 2 more

Can turn the polka dots covering his costume into a variety of weapons.

David Dastmalchian
The Polka-Dot Man, also known as Mister Polka-Dot, was a minor supervillain who fought Batman and Robin early in their careers. He became known for committing grandiose crimes revolving around a bizarre theme of polka dots. The spotted pattern on the Polka-Dot Man's gimmicked costume also concealed a variety of hidden weapons.

Shortly after Batman began appearing in Gotham City, his growing renown inspired an entire generation of costumed rogues who committed largely harmless crimes to attract his attention in the hopes of matching wits with the legendary vigilante. Most of these absurd personalities predated Gotham's well-known rogues gallery such as the Joker and the Penguin, and Batman dismissed them as "egocentric personalities" who were a mere "nuisance" at best. Among these was a local crook named Abner Krill, alias Mister Polka-Dot. (Batman: The Widening Gyre #4, February 2010)

Batman and Robin first encountered Mister Polka-Dot while responding to what they assumed was a routine break-in at the Spot Carpet Cleaning Company. Krill and two henchmen had breached the owner's office via a skylight and were attempting to crack his safe. Mister Polka-Dot introduced himself, declaring his intention to make his name "known throughout the underworld". Krill's white costume was covered with multicolored polka dots, each of which instantly transformed itself into some sort of odd weapon or escape device when torn from its place. Mister Polka-Dot demonstrated his abilities for Batman by throwing a buzz saw dot at him, then escaping on a second dot which expanded into a lightweight, man-sized saucer controlled by a switch on Krill's belt.

Mister Polka-Dot subsequently embarked on a major crime spree, which he dubbed his "on the spot" caper. He netted modest windfalls by robbing two toy companies, a skating rink, and a nightclub, though a more ambitious scheme to steal a black pearl from a visiting diplomat named Ran Jafir was thwarted by Batman and Robin. Krill was also obsessed with his public image, especially among other criminals; he garnered sensational headlines for his impractical crimes and became well-known in bars frequented by underworld figures for his constant boasting that he would outsmart the Dark Knight. However, it was Dick Grayson, the first Robin, who was able to bring Krill to justice.

Robin solicited the assistance of Ran Jafir, who owned a pet leopard trained for tracking purposes. Mister Polka-Dot was observed fleeing from his latest crime on foot, so Robin requested use of the leopard to follow the spotted bandit. Unfortunately for him he was observed by Krill's henchmen outside their hideout and doused with knockout gas. Krill threatened to shoot the leopard unless Robin penned a brief note luring Batman into a trap. However, dots proved to be the villain's downfall when he missed the holes Robin punched in the note, actually a coded message in braille dots that alerted Batman to the threat.

By this point Batman had ascertained a pattern in the robberies, which created a connect-the-dot stick figure superimposed on Gotham City. Traveling to the probable head of the figure (a map company, whose cities were designated by dots), Batman caught Krill in the act and handed him a hard punch to the jaw: "Right on the dot! By now, you should be seeing spots before your eyes, Mister Polka-Dot!" (Detective Comics #300, February 1962)

For several decades Mister Polka-Dot faded into obscurity, although he briefly reappeared in the files of Batman's Bureau of Missing Villains. (Batman Family #15, January 1978) It was later revealed that he'd obtained minor celebrity status as a result of his peculiar gimmicks. The Gotham media continued to follow Krill's life and he may have been featured as a guest on several local talk shows. When the city was threatened by more sophisticated, lethal supervillains such as the Joker public interest dried up and Mister Polka-Dot was seen hanging up his costume, seemingly for good. (Batman: The Widening Gyre #4, February 2010)

Krill was finally driven to crime once more when he found himself unemployed, penniless, and desperate to pay his bills. No longer able to afford his original electronically gimmicked costume, he instead resorted to using a baseball bat in a poorly thought-out attempt to rob a jewelry store, grumbling in response to the ridicule he received that "I'm not specked! I'm the Polka-Dot Man." Detective Harvey Bullock and a GCPD patrolman named Foley were the first on the scene; during the bungled heist Krill struck Foley's knee before Bullock grabbed the bat and retaliated by administering a savage beating. The assault put the Polka-Dot Man in traction. He lodged a formal complaint against the GCPD for excessive force, which resulted in Bullock being forced to undergo a psychiatric evaluation. (Batman: GCPD #1, September 1996)

Following his recovery, Krill became a committed alcoholic who spent more time drinking himself into a stupor in sleazy bars than troubling Batman. (Batgirl: Year one #5, June 2003) The fact that Robin had tracked him down with a leopard became something of a running joke among other villains. (Final Crisis Aftermath: Run! #3, September 2009)

As Nightwing, Dick Grayson encountered the Polka-Dot Man a second time when he trashed My Alibi, a bar known for underworld regulars who vouched for each other's whereabouts when they were off committing crimes. Nightwing pitched Krill through a window display and into the street, where he was picked up by the police. (Nightwing #104, April 2005)

After Batman's disappearance during the Final Crisis, the Polka-Dot Man joined a gang of costumed misfits led by Immortus, whom he quickly latched onto as a mentor. Other members of the organization also included Professor Milo and the Condiment King. Milo used the rogues as live test subjects in his research; in exchange, they received augmented equipment and abilities. (Final Crisis Aftermath: Run! #2, August 2009)

The Polka-Dot Man was later sent to help apprehend the Human Flame after the latter betrayed Immortus and fled with their collective funds. His skull was crushed by a flying manhole cover when the Flame ignited a gas line beneath the streets. (Final Crisis Aftermath: Run! #4, October 2009)

"Inside my costume are wires connected to each dot. While a dot is on my costume, the dot is neutral...but when I rip off a dot, it is activated electronically - and then it does the job for which it was gimmicked!"
―Polka-Dot Man[src]

Whether he created the technology himself or stole it is unknown, but Abner Krill's homemade costume possessed potent offensive capabilities in the form of its polka dot pattern. When attached to the costume, the dots were inert, but once removed they invariably enlarged in size and became different devices which would aid in his crime spree. To prevent his discarded technology from being retrieved or inspected, Krill rigged the gimmicked dots with a self-destruct mechanism that automatically engaged after they had served their intended purpose.

Maintenance of the electronic suit was expensive, as were the gimmicked dots, and Krill was unable to afford either during periods of insolvency. 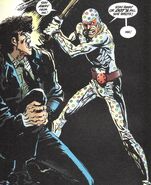 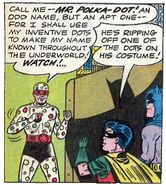 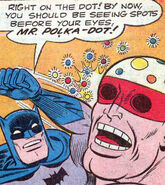