"Take a card!"
―Joker to the Batman[src]

The Razor-sharp Playing Cards are weighted, metal throwing weapons used by the Joker. They look like ordinary playing cards consisting of all the suits of Hearts, Diamonds, Clubs, Spades and Jokers, but they are made of stainless steel and have extremely sharp edges.

Joker often uses them a throwing weapon in the same way as a ninja shuriken, similar to Batman's Batarangs.

Joker has never been known to coat these throwing cards with Joker Venom, as characters like Batman often shown being wounded by them with no signs of poisoning. These throwing cards may have been inspired by a poisoned paper deck of joker cards with extra sharp edges, used in Joker's second appearance, The Joker Returns (Batman #1). Edgar Martin, picks them up noticing nothing odd about their weight but cuts his finger on the edges, remarking that it must be newly printed deck. He then perishes from the deadly paper cut. Since the debut of the throwing cards in Be A Clown of Batman: The Animated Series, they have appeared in many other cartoons and video games. Adverting art often depicts Joker throwing playing cards into the air but these have seldom appeared in actual DC Comics stories.

Razor cards being thrown at Batman 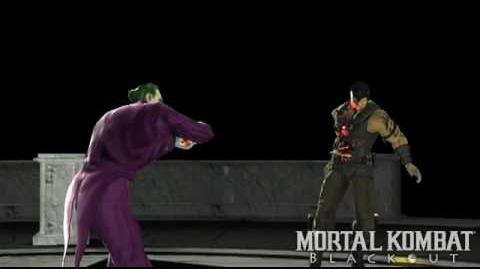 Mortal Kombat vs. DC Universe The Joker's "Killer Cards" Fatality
Add a photo to this gallery
Retrieved from "https://batman.fandom.com/wiki/Razor-sharp_Playing_Cards?oldid=206684"
Community content is available under CC-BY-SA unless otherwise noted.