"I know I have fifteen minutes of air left before I die."
―Batgirl[src]

The Rebreather (or Respirator) is a small breathing apparatus used by Batman and his allies. It is usually kept in the Utility Belt and allows the user to temporarily breathe underwater, in environments contaminated by toxic gases or in other situations where oxygen may be absent.

Batman often uses the device during underwater missions to breathe without the need for an oxygen tank. Since the breathing apparatus is able to recycle the exhaled breath of the wearer and absorb the carbon dioxide, the device is capable of providing a temporary air supply whilst underwater or in an environment where the air is poisoned by a dangerous gas. 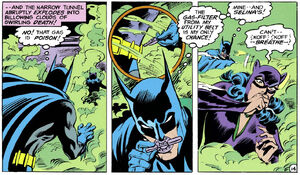 Through “artificial gill” technology, the rebreather provides an air supply when the user bites gently on the device’s mouthpiece. This triggers a tiny compressor to filter water from the two arms on the sides and draws them into the membrane. The membrane features holes small enough to let only oxygen molecules through, filtering out water and other liquids. Small on board liquid oxygen tanks provide a small air supply.

Batman's rebreather is usually a mask or a simple miniature mouthpiece,[1][2] but is sometimes also integrated in a larger diving suit that the Dark Knight uses for longer deep sea missions. Batman has used this Deep Sea Batsuit in "The Supergirl From Krypton, Part 1 of 6: Alone" in order to search for meteor fragments in the Gotham River, leading to him finding the space-pod of Kara Zor-El.[3]

Rebreathers have also been carried by other members of the Batman Family, such as Batgirl and Damian Wayne.[4][5] Additionally, they are also often used by Batman to save others from drowning or suffocating.

In the episode "Smack In The Middle", Batman and Robin wore their rebreather masks when the Riddler and his goons filled the Republic of Moldavia Pavilion with laughing gas in an attempt to steal the Mammoth of Moldavia. During another of the Riddler's schemes in "Batman's Anniversary", the supervillain and his henchmen flooded a vault of the Gotham City Bank in the Financial District and wore diving suits to retrieve the money. The Dynamic Duo put on their Bat-Respirators and tried to stop the criminals during an underwater battle in the flooded vault, but were ultimately overpowered and unable to prevent them from escaping with the loot.

On another occasion in the episode "Louie, The Lilac", Batman protected himself from poisonous lilacs with his respirator. Robin was already left unconscious from the alba vulgaria lilacs and only moments later, Batman himself was also knocked out by Louie the Lilac who suddenly appeared behind him.

On the cover of the comic issue Batman '66 Meets the Man from U.N.C.L.E. #5, Batman and Robin are seen diving in the sea while wearing their rebreather masks from the show.

The respirator was used by Batman to shield himself from Fear Gas during his first encounter with the Scarecrow in "Nothing to Fear". In "The Last Laugh", the Dark Knight later also wore the mask to protect himself from Joker Venom when the Clown Prince of Crime and his henchmen poisoned Gotham City with the dangerous laughing gas on April Fool's Day.

Rebreathers appear near the end of Batman Forever, worn by Batman and Robin during the approach to Claw Island.

Following a murder in a club, the Joker and Harley Quinn were chased across Gotham City by Batman. In an attempt to escape from the Dark Knight, Joker drove his car into the Gotham River and left the sinking car, leaving Harley to drown. However, Batman leaped off the docks and used his rebreather to dive to the car in the river. While wearing his rebreather mask, Batman was able to retrieve Harley from the river, took her to the Batmobile on the pier and arrested her.

The Rebreather makes several appearances during the Batwoman television series, most notably during the episode "The Rabbit Hole", in which Batwoman used the rebreather mask to save Alice from drowning.

In this continuity, both Batman and Batwoman have used the rebreather. Bruce Wayne originally left the breathing device behind in the Batcave when he abandoned his vigilante identity and left Gotham City. Kate Kane began carrying the rebreather along with other gadgets from Batman's former equipment once she started fighting crime as Batwoman. 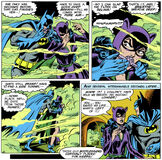 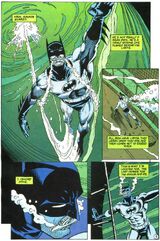 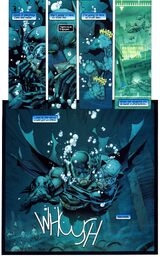 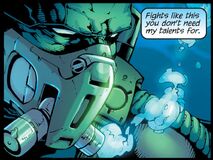 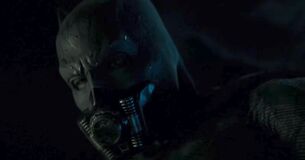 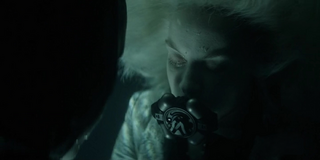