Robert was an officer of the GCPD, one of the few honest patrolmen on the force. He seemed to have a close bond with Commissioner Gordon.

Save the Festival fundraiser

Robert arrived at Wayne Manor during the civic fundraiser for the bicentennial festival and told Gordon that they had received an anonymous tip that Jack Napier and his men were at Axis Chemicals, and that the corrupt Lieutenant Eckhardt lead a squad to gun them down. They both then left immediately. 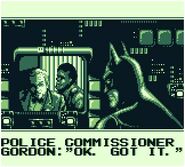 GameBoy appearance
Add a photo to this gallery
Retrieved from "https://batman.fandom.com/wiki/Robert?oldid=207222"
Community content is available under CC-BY-SA unless otherwise noted.