Robin is deuteragonist of the LEGO Batman series. The sidekick to Batman, he was a member of the Bat-Family and the Dark Knight's ward. The Robin identity was previously used by Dick Grayson and Jason Todd. Tim Drake served in the role from before mass breakout at Arkham Asylum to after an encounter with Lord Voltech, though abandoned it to become Red Robin. The current serving Robin is Damian Wayne, Batman's son with Talia al Ghul.

Tim Drake serves as Robin during LEGO Batman. Summoned to Gotham City by the Batsignal, Robin helped Batman investigate three plots orchestrated by the Riddler, the Penguin and the Joker.

Tim Drake continues to serve as Robin. He helps Batman, Superman, and eventually the Justice League to stop Lex Luthor and The Joker from winning the presidential campaign.

Tim Drake appears one last time as Robin. During the opening, he is kidnapped by Lord Vortech and held hostage by the gathering of villains. Robin is later merged with Frodo Baggins and MetalBeard into a robot called the Tri, though the process is reversed and the group is separated after the heroes defeat it. 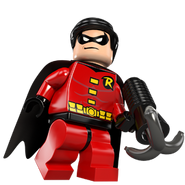 Retrieved from "https://batman.fandom.com/wiki/Robin_(LEGO_Video_Games)?oldid=219130"
Community content is available under CC-BY-SA unless otherwise noted.