Richard "Dick" Grayson was the son of skilled acrobats John and Mary Grayson; John was also the circus manager. Mary's special nickname for Dick was a "Robin"; when Dick expressed embarrassment, John jokingly renamed him "the flying squirrel". According to the executive producer, Alan Burnett, in one of his interviews, he states that Robin was 14 at the start of his appearance; the same age, his voice actor Evan Sabara was when he voiced Robin for "The Batman."

Tony Zucco (voiced by Mark Hamill) in the episode "A Matter of Family" attempted to extort money out of the Flying Graysons, calling it "protection"; the Batman steps in and arrests one of Zucco's brothers as Dick watches in awe. To "return the favor" of having broken up his crime family, Zucco kills Dick's parents by tampering with their trapeze ropes during a night performance in Gotham. Had the ropes held out longer, Dick would have swung on them and fallen to his death. Bruce Wayne from the audience watches the murder and Dick crying on the trapeze platform.

Dick then meets Bruce, who has paid for the Graysons' funeral costs and has decided to adopt Dick as a foster son. Alfred, when Dick notices his guardian's constant absences, lectures Batman (who obsessively searches for Zucco) on being a better father to the boy. Alfred also hangs up a portrait of the Graysons over a fireplace, which Dick sleeps in front of after nightmares keep him awake. This habit leads him to find the Batcave, where he learns that Bruce Wayne is Batman. He also learns that Batman is going after Zucco and insists that he should track the man down. Bruce doesn't even consider the issue, telling Dick to go to bed.

The Batman locates Tony Zucco, but the extortionist catches him off guard and straps him to a knife-throwing board. Dick (dressed in the circus costume he had mocked earlier with modifications) stops Zucco from stabbing Batman in the heart, but lets his temper get the better of him when Zucco asks, "Didn't your parents teach you any manners?" allowing Zucco to beat him down with a juggling bat (similar to a sequence in Robin: Year One, where Two-Face beat up the Boy Wonder with a baseball bat).

Batman breaks free and thoroughly beats Zucco, frightening the man to climb up the trapeze platform and fall out of fear. Dick saves Zucco, saying that he wanted him to get "justice" from the law. Batman, impressed with this ethical code, decides to take on Dick as a partner; Dick, in the memory of his parents, chooses the name "Robin".

Robin becomes The Batman's "official partner" and second sidekick, as well as his guardian's confidante. He and Batgirl initially bicker on their first meeting (he considered her an annoyance and Barbara was jealous of the trust Robin earned that she still hadn't gotten) but have bonded since the two of them and the Batman took down Team Penguin. He and Barbara banter both in and out of costume; she spends New Year's Eve with him and Bruce.

Dick, in accordance with his Pre-Crisis origins, voluntarily steps down as Robin (as opposed to Batman "firing" him) to become Nightwing. He still has a good relationship with Bruce and Barbara, as shown when they both call him "Robin" while fighting Mr. Freeze. Also, within The Batman continuity, he seems to be the only Robin; neither Jason Todd nor Tim Drake succeeds him.

Dick has black hair that is worn slicked back when not in costume, and is left messy with two thick strands hanging in his face; he has green eyes that are hidden behind a black and white domino mask. His civilian clothes usually consist of black jeans with a brown short-sleeved button-up shirt and white/black sneakers.

His costume consists of green tights with a red armored vest, which had a black "R" over his left pectoral muscle, over a green short-sleeved shirt, green elbow-length gloves and a black cape that had a yellow interior.

Robin is a skilled acrobat and martial artist, combining his circus history with Bruce's rigorous training.

Robin appears in all the Season 4 and 5's episodes, except for Attack of the Terrible Trio. 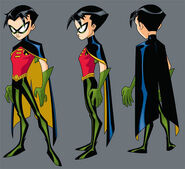 Front, Side and Back view.

Retrieved from "https://batman.fandom.com/wiki/Robin_(The_Batman)?oldid=210675"
Community content is available under CC-BY-SA unless otherwise noted.