"You know what I always say? FRIGHT makes right!"
―The Scarecrow[src]

The Scarecrow is a villain who appeared in LEGO Batman: The Videogame. Scarecrow has been set at odds with Batman on a number of occasions. Most of his schemes often revolve around either gaining more money for his research or using living humans as unwilling test-subjects in his twisted experiments. The "fear-gas" that Scarecrow uses ultimately knows no bounds in shape or name, much like the Joker's laughing-gas. Several times, it has been featured in either gas or dart form, and its effects range from visions that last for no more than a few minutes to full-blown hallucinations that can last for hours. Trained by Ra's Al Ghul, he was also great at combat.

Scarecrow is one of the many villains who break out of Arkham Asylum, and he chooses to join the Joker's group of villains. Scarecrow, The Joker, Harley Quinn, Mad Hatter and Killer Moth all plot to bomb the Gotham Cathderal to spray Gotham City with laughing-gas. Scarecrow is first seen playing a card-game with Mad Hatter and Killer Moth (only in the console versions). The Master Of Fear assists in the Joker's scheme by battling the Dynamic Duo in his biplane, but it is destroyed and plunges to the ground, seemingly killing him. In reality, however, he and The Joker survived the crash using balloons to glide down and they drop through the roof of the Gotham Art Gallery. Scarecrow and the Joker make their way to the storage area of the gallery to escape, however, they are ambushed by the police. The Joker escapes, but willingly leaves Scarecrow to be captured with a crane, laughing at Scarecrow as he runs away. Scarecrow is last seen in his cell at Arkham Asylum, tied to a pole with several birds sitting on him-like a real scarecrow.

After the Joker and Lex Luthor break several inmates out of Arkham Asylum, Scarecrow is set free. The Dynamic Duo encounter him deep within Arkham, where he uses his Fear Gas to disorient the two and appear taller to attack them. However, after activating two vents, the Scarecrow's gas is neutralised and he is defeated.

After this, he can be found in Open-World Gotham in the Amusement Mile, where he has formed a temporary base in a giant pumpkin. He can be defeated and bought for use. 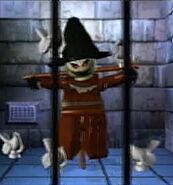 Add a photo to this gallery
Retrieved from "https://batman.fandom.com/wiki/Scarecrow_(LEGO_Batman:_The_Videogame)?oldid=196663"
Community content is available under CC-BY-SA unless otherwise noted.