"Me? It was your plan, you goofy clown!"
―Scarface to The Joker [src]

Scarface is the name of a puppet used by the Ventriloquist. It was kept on display at Arkham Island.

Gotham's Blackgate Penitentiary once had a Gallows Tree from which 313 criminals with death sentences were hanged. The wood from that tree was whittled by an inmate into the puppet Scarface, and that inmate was murdered by Arnold Wesker, a man who soon fell under Scarface's influence. While most believe that Scarface is simply a tool through which Wesker, as the criminal mastermind, the Ventriloquist, acts out a dark side to his personality, Wesker himself believes that Scarface is possessed by the souls of who died beneath the gallows Tree, and the puppet actually motivates him to commit the duo's many crimes.

Although Wesker doesn't make an appearance in the game, Scarface makes a cameo appearance in Batman: Arkham Asylum. The dummy is first seen in a glass display case in the old Arkham Mansion, in Warden Sharp’s Office. Scarface is later, however, glimpsed on monitors and heard speaking during the third run-in Batman has with the Scarecrow in his dream-scape, during which the dummy, manipulated by Joker gives a twisted version of Sharp's welcome speech seen playing in the Intensive Treatment Center.

"When I first heard the Joker planned to take over this nuthouse, like many of us, I thought he was crazy. When he outlined his dictation of a hospital dedicated to ensuring inmates remain loony for as long as possible, I thought he was wacky! Then when he held me down, and Razor cut a new smile onto my face, I decided he had a point. Situated in a small island in Gotham Bay, we stop at nothing to ensure no screwball can fly the coop. Recent successes with Bruce Wayne, a classic case of split personality if I ever saw one, has cemented our reputation as a pioneering slaughterhouse. Our head of research, Dr. Crane, has made no real progress, but seems to enjoy his work, so what the hell. Our new patient's ward is manned by Waylon Jones, whom, I'm assured, has cured almost every patient sent to him, and boasts empty beds in all his wards."

Near the end of the game, Scarface, actually being used by the Joker in a fictional argument, is seen being blamed for Batman's success, despite, as Scarface points out, it being the Joker's plan. Losing his patience, the Joker throws the dummy away, promising to send it back to the Ventriloquist. Wesker's name appears on the party list.

After the Arkham riots, Scarface was locked in a cell containing other criminal belongings, and was found by Joker when he broke out of extreme isolation. Using the puppet for company and to keep him from going insane, Joker plotted his breakout for months with Scarface for entertainment, who was left behind at the asylum when Harley Quinn helped Joker escape. Scarface remained abandoned in the cell until Mugsy Binks, a former old time associate of the Ventriloquist, brought the puppet to Joker at Arkham City to attempt to get back into his gang. Overjoyed at the reuniting of his good friend, Joker embraced Scarface and started spending most of his time with him, much to the dismay of Harley . Envious, Quinn threw the puppet into a boiler "accidentally", but Joker merely smiled and held up an identical Scarface made by Mugsy, who would always create a copy whenever Joker mutilated another. The current Scarface puppet was later stolen by Penguin to add to his museum.

After the Joker was kidnapped by Two-Face, Scarface was briefly reclaimed by Arnold Wesker, who later attended Dent's trial against the clown and voted guilty due to Joker forcefully taking Scarface from him. After Wesker was deemed sane and left Arkham, Scarface was acquired by the Penguin and placed in a display case in his museum.

In the DLC mission Harley Quinn's Revenge, Scarface is seen in a baby's cradle at the Steel Mill, painted to resemble the Joker. This was likely done by Harley in her rage that she possibly had a miscarraige or stillbirth, due to the fact that dozens of pregnancy tests reading negative surround the cradle. 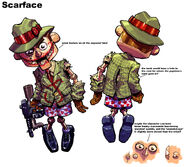 Art of Scarface by character artist Carlos D'Anda.
Add a photo to this gallery

Retrieved from "https://batman.fandom.com/wiki/Scarface_(Arkhamverse)?oldid=214617"
Community content is available under CC-BY-SA unless otherwise noted.