"Doggone it, Batman. You cheated, you know we ain't no good in a fair fight."
―Shame[src]

Shame was a villain and enemy of Batman in the Batman 1960s TV Series. He was portrayed by Cliff Robertson.

Shame was known by many as the Conniving Cowboy of Crime with his trademark white stetson and trusty six shooters, who was quite clever despite his dimwitted look. Though his complete background is not known, Shame has claimed that he had to be good with a six-shooter where he came from. He has a reputation for always showing bravado and daring, but he often embraces cowardice when facing Batman. He usually tries to win fights by outnumbering his opponents and using firearms, but Batman always prevailed nevertheless. Shame wears a rather colourful outfit compared to most bandits, sporting a bright purple polka-dotted bandanna during hold-ups. He has a quick temper, and when he loses it he begins screaming, shooting and throwing objects around the room.

His first nefarious scheme was to build a super-powered truck that could outrace the Batmobile and then steal four prize Black Angus Bulls each worth $300,000 on display at the Gotham rodeo. However, the Dynamic Duo knew that he would steal the bulls and figured out that he would need to feed them. After a blazing gun battle, Shame and his gang were defeated and sent to prison.

Later on, Shame escaped from prison with help of his fiancée Calamity Jan and formed a new gang.

He started with stealing a priceless diamond pendant and a $22,000 bankroll from famous singers at the Gotham City Opera house, then went on to steal old money on a train that was being transferred to the Gotham Treasury for destruction. Batman decided to allow Shame's pride to be his downfall by challenging him to a showdown in the condemned tenement district. Shame attempted to double-cross him by telling his gang to wait in a nearby alley and open fire on his signal but the gang were captured by Robin and Batgirl. After a fierce fist-fight, Batman captured Shame and returned him to prison along with his new gang.

His hideouts have included Westernland Amusement park and Gotham City Central Park Stables. Even though he was always quick on the draw, Batman was always quick with his mind. This always lead to his defeats because he could only use his guns, not his fists.

While Shame relied mainly on his trusty guns, he did use a cattle stampede and fear gas to outwit Batman and the others.

Shame always had members in his gangs, some of which played a major part in his schemes: 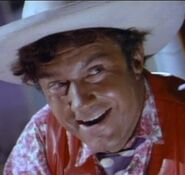