For more information, visit the character's page on the Spawn Wiki.

Michael Jai White
Keith David
Spawn was the alias of Al Simmons, a vigilante living in a New York City of a separate dimension from Batman.

Albert Francis Simmons, born in Detroit Michigan, was a highly decorated soldier in the United Civilized States Marine Corps. He later joined the United Civilized States Secret Service and became a highly decorated member, most notably for saving the President in an assassination attempt. This led to his promotion to the CIA. In the CIA, he was recruited into a special division known as the U.C.S. Security Group, a high-level task force with jurisdiction in all domestic and foreign situations.

Al questioned many of the actions of his agency, particular of its director Jason Wynn, believing that certain missions involved the unnecessary sacrifice of innocent civilians. Wynn and Simmons began to butt heads more often and Simmons planned to resign.

Upon learning of Al's resignation, Wynn ordered an assassin Chapel to murder Simmons. Simmons was sent to Hell, due to his life as a mercenary, and made a deal with Malebolgia: Al would be reborn a Hellspawn, a lieutenant in Hell's army, if he is allowed to see his wife one final time.

Malebolgia returns Simmons to the world, but with little memory, a badly disfigured body, limited yet seemingly boundless magical powers, and a monitor, the Clown, AKA Violator. Simmons slowly realizes that five years have passed. When he decides to visit Wanda for his "one final visit", he shapeshifts his body, but discovers his transformation ability cannot give him his former appearance. He discovers that his wife, Wanda Blake, has since married his best friend, Terry Fitzgerald, and the two have a daughter, Cyan. Now known as Spawn, Al's first few adventures are anti-hero in nature as he takes down street gangs and organized crime.

Spawn's body is quite dense, weighing over five hundred pounds (226 kg), and is composed completely of necroplasm. This gives him superhuman strength and durability. While he still has internal organs, they are non-functional, and their damage/destruction does not hinder Spawn in the least. These organs re-appear when he magically regenerates his wounds. This may be due to Spawn's inability to let go of his human self, retaining his human organs even though he no longer requires them.

Spawn wears a living symbiotic costume, Leetha of the 7th House of K (also known as K7-Leetha). While wearing it, the host assumes a dominant role over his suit. His cape, spikes, chains, and skulls are all part of an organism bonded to his central nervous system that will protect Spawn even if he is unconscious.

The true source of the costume is the necroplasm in Spawn's body, from which it feeds. It is possible for Spawn to draw this energy back when he needs it, using it to power his abilities without draining his own reserves. The costume can also feed off evil energy from the physical world, feeding off the ambient evil of people, animals (mainly carrion insects, but also wolves and bats) and even certain parts of the city. A part of his physical powers actually comes from his suit, because of its connection to his nervous system, Simmons is able to use it in a shapeshifting manner, including the manifestation of spikes, armor plating, or transforming the cape into a battle axe. The cape itself is an effective offensive weapon able to strike in battle with its extreme precision, severing limbs, and/or disarm enemies.

Spawn has vast magical powers. Spawn has a limited power supply whose quantity would be shown to the reader in the form of a counter that began at 9:9:9:9. Each time Spawn used his energy, the counter drains. Consequently, Simmons relies primarily on his costume's natural abilities or weapons rather than the magical abilities in combat. Though the power source is finite, Spawn's biggest limitation is imagination. Simmons uses this ability in various ways, including resurrecting the dead, firing blasts of necroplasmic energy, teleportation, shapeshifting, flight, and curing the sick. Simmons powers briefly becomes nearly omnipotent, after he eats fruit from the Tree of Life.

Spawn is practically immortal unless beheaded by a weapon of heaven. He is also rendered powerless (and therefore mortal) in a patch of alley known as "The Deadzone": a small patch of Earth that is Heaven's domain and in the ethereal realm of the "Greenworld."

Simmons is a highly trained soldier proficient in both armed and unarmed combat. Spawn's training is to the extent that he chooses to use firearms over his magical abilities. 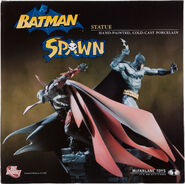