Delbert Billings (a.k.a. Keith Sherwood), was a Gotham City painter who uses the trance-making effects of optic art to begin a criminal career. Billings uses an array of optical illusions and hypnotic weapons to commit crimes. He has tried to pit his skills against Gotham's defender, Batman, on several occasions.

Dressed predominantly in orange and yellow, the Spellbinder was a fashion nightmare, sort of a living representation of what the older generation imagined pop art to be in 1966. Indeed, the hypnotic bandit "was an art forger -- who discovered the trance-making effects of modern op art -- and decided to use his talents in direct and spectacular crimes. Billings designed hypnotic weapons and assembled a team of henchmen. He ran into Batman during his first robbery, but Spellbinder hypnotized the crimefighter into believing he was involved in an entirely different situation, and his gang made their getaway. The Spellbinder continued to send Batman into a succession of trances, variously using body gestures and artificial devices before the Dark Knight finally trained himself to reverse his hallucinations. (Detective Comics #358)

Spellbinder escaped but then left Gotham to try his luck in Metropolis, his costume design scaled back a bit and now equipped with a hypnotic propeller on his back. Using a miniature turntable he was able to create sonic blasts which would make targets more susceptible to his hypnotic suggestions. Billing's sonic chest plate proved quite effective at blasting Superman and the addition of a shock absorbing chin-guard to his helmet protected him from being knocked out by Superman, special lenses likewise protecting him from super-hypnosis by the Man of Steel. However, his sonic blasts became his undoing when the Man of Steel maneuvered him into a miniature echo chamber and the Spellbinder knocked himself into unconsciousness when his own sonic blasts where echoed back on him.

The villain returned to Gotham during a crime spree provoked by Batman's mysterious absence. Back in his original costume and using simplified hypnotic devices, Spellbinder joined a loosely knit conglomerate of crime organized by the Monarch of Menace. Spellbinder was the first member of the group of rampaging villains to be captured by Batman, who later disguised himself as Spellbinder to infiltrate the group and capture the Monarch. (Batman #336)

By late 1995, Billings was on the run again from Batman and the police along with his girlfriend, Fay Moffit. Even so, he wasn't desperate enough to accept an offer of power from the demonic Neron. Unfortunately for Delbert, Fay was. She put a bullet in her lover's head and asked Neron if the deal was only open to Billings. "Actually," Neron replied, "I wasn't talking to HIM." (Detective Comics #691)

Spellbinder has made subsequent cameo appearances in the non-canon Solo #7, and as a hallucination induced by the Scarecrow's fear gas. (Batman: The Dark Knight #5)

Spellbinder used a number of optical devices of his own invention that hypnotize others. His fighting skills were minimal.

Billings is a Psychologist at Hamilton High. He wears a costume featuring an orange and black swirl design, and uses a large floating 'eyeball' that allows him to project images into the minds of others using hypnosis. He was voiced by Jon Cypher.

One question that has been raised about this Spellbinder is how he came to acquire his advanced mind-warping technology on his apparently meager salary, especially since the most advanced virtual reality technology in the Batman Beyond universe still requires larger immobile machines. It can be assumed, given his knowledge and intellect, that he created his devices from scratch. Bruce Wayne even admits that his technology is highly advanced, meaning much more so than standard consumer technology.

Spellbinder features in the following episodes of Batman Beyond: 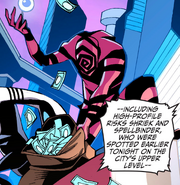 Retrieved from "https://batman.fandom.com/wiki/Spellbinder?oldid=190363"
Community content is available under CC-BY-SA unless otherwise noted.