Batman
Penguin
The Super-Batarang[1] is a hi-tech computerized Batarang. The weapon can scan the area for surrounding targets and plot a trajectory that it will follow once thrown using a self-propulsion system.

During an encounter with the Red Triangle Circus Gang, Batman found himself surrounded by five individuals, including a clown armed with a FIM-43 Redeye rocket launcher. Batman quickly grabbed the super-batarang from his utility belt and programmed the targets before releasing it to neutralize the threat. After knocking out four clowns it was caught by the Ratty Poodle before it could strike the Poodle Lady, who was unarmed and stood expressionless as the object approached her. Somehow the batarang's propulsion stopped once it was in the dog's mouth, perhaps hitting a button on the control pad. Before Batman could approach the pair to retrieve it the woman and her dog ran off with the weapon as the Sword Swallower and Thin Clown rushed towards him, the latter with a ticking time bomb strapped to his chest.

Later the Penguin grabbed the batarang from the dog's mouth to hurl it that at the Ice Princess in her dressing room tent. After being told it was a camera, she stood up and struck as pose before it collided into her cranium, resulting in a bloody injury. The Penguin then took her to an abandoned building to began his plan to frame Batman for her kidnaping and murder. The super-batarang was later discovered by authorities in her tent once she was found missing. Commissioner Gordon actually showed the bloodstained weapon in an evidence bag on a live news broadcast, emphasizing that it was purely circumstantial. This was seen by Bruce Wayne on his date with Selina Kyle in Wayne Manor. Immediately after seeing it and hearing of the kidnapping he announced that he had urgent business and left. Selina also noticed the program moments later and realized she was late to play her role in the plot as Catwoman.

This gadget was designed by Tim Flattery. A few variations of the prop were made, some that fold open, some that were just solid pieces for stunts and one with a working LCD screen for the closeup. 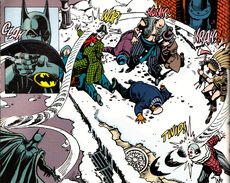 In the comic adaptation, it's used on the the Tattooed Strongman and the Knifethrower Dame
Add a photo to this gallery

Detective Comics #32 variant cover
Add a photo to this gallery

Retrieved from "https://batman.fandom.com/wiki/Super-Batarang?oldid=199291"
Community content is available under CC-BY-SA unless otherwise noted.