Tally-Man is a hit-man/mercenary in Gotham City who themes himself around old-fashioned tax collectors and who was obsessed with murdering those who owed debts to others.

The few glimpses provided into the Tally Man's past reveal a tragic childhood. Starving and living in rags, the boy who was to become the Tally Man lived with his mother and sister, in constant fear of the criminals who threatened the family for the money his father had borrowed from them years before. After his father died, those same criminals extorted his weekly fee from the deceased man's wife. The boy begged his mother not to pay, but she tearfully replied, "Everybody has to pay the tally man." One night, when the collector came, his mother could not afford to pay and the criminal beat her. Filled with rage, the boy attacked and brutally killed the money collector with a fireplace poker. The 12-year-old boy was arrested for murder, and abused horribly by the others in the boy's prison, who called him a "mama's boy." After his release, the boy returned home. When he discovered his sister had died of starvation and his mother had committed suicide, his mind snapped.

Years later, a figure dressed in the strange dark robes of an old-fashioned tax collector emerges in Gotham City, calling himself the Tally Man. Hired by the underworld to "collect" on debts owed, his fee is not money, but human lives. When Tally Man attempts to collect the "debt" owed by Batman, he battles Azrael, who is standing in for Batman while he recovers from a broken back, mistaking him for the original. Azrael brutally beats and scars Tally Man, leaving him with an even greater hatred for the Dark Knight. Tally Man returns to claim his debt again, only to be defeated by Nightwing (who has taken Azrael's place as Batman), believing the former Boy Wonder to be the man who had bested him previously.

Tally Man is seen aiding Two-Face during the "No Man's Land" story arc as an executioner. In the novelization of "No Man's Land" Two-Face murders the Tally Man himself. After a long absence, he was most recently seen in Infinite Crisis #7 during the Battle of Metropolis. 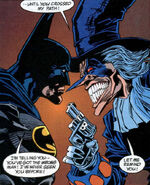