The SNES version is developed and published by Konami. The action takes Batman to an amusement park and other places where supercriminals do their nasty work. Nintendo Power criticized the game for not giving Robin a more active role (the game was actually under development before the series was retitled). Otherwise, he supplies Batman with his moral support. Despite this, the game was well received by fans citing the faithful rendition of not only the characters and settings but also the music of the actual animated series.

Most of the major villains from the animated series appear. The ones not in the last level are missing beacause they are fought in a different gameplay style rather than fighting you in person. The following major villains appear in the game as bosses (each with their own level):

X = Appear only in the last level The Gauntlet.

Y = Appear as a level boss and in the last level.

In addition to the above villains the only other major villain from the series to appear is Harley Quinn. However her two very brief appearances are cameos at best as she only has a couple of lines of dialogue.

In addition to Robin several other supporting characters appear in the game:

It should be noted though that unlike Robin none of the other characters make significant appearances. Summer Gleeson appears on the Batcomputer when there is a news item (usually at the beginning of each level), Alfred appears accompanied with dialogue during the Batcave scenes at the beginning of each level and password and game over screens. Both Commissioner Gordon and Barbara Gordon appear in a later level in cameos. Barbara Gordon is never shown as Batgirl in the game.

For the most part, is an action-adventure platformer in which the player only controls Batman, and follows him to the end of each stage, where a villain is set to appear. However, the style and design of the stages themselves are different between each other, which gives notable diversity to the game.

Some of the more common features in the game is the possibility to equip with different gadgets, such as bombs, x-ray lenses and so on. Some of the gadgets are in some cases essential to complete some stage. There is also the possibility of returning to the Batcave in order to re-equip the gadgets and restart an entire stage with all the lives the players has accumulated to that point (in case the player had lost lives).

The game features passwords, which leaves the player in the last played stage. The passwords also takes count of the numbers of lives remaining and the continues used. These cannot be obtained in the Hard difficulty, which means that the game must be completed from the beginning.

Most of the levels in the game are actually based on a number of episodes in the animated series as follows:

Level 4: Tale of the CatEdit

The Gameboy version is the only one that was released before the show changed titles, and is the only version that kept the name 'Batman the Animated Series (the SNES version was originally going to have this title, as well as the same title screen as the GB version). The game is mostly episodic like the SNES version, with cutscenes in between each level to connect any story there is. The game takes place before Harvey Dent becomes Two-Face

Level 1: The Joke's on YouEdit

The Joker is laying out packages filed with exploding toys all across the city.

Level 2: The Chill of a LifetimeEdit

Mr. Freeze and Scarecrow have teamed up to take control of the city.

Poison Ivy has kidnapped Harvey Dent and taken him to her greenhouse lab, and is spreading monster plants throughout Gotham. To make matters worse, Catwoman is out looking for someone to fight. Based on the episode Pretty Poison. It's also the only level that shares a boss with the SNES version.

Penguin and Riddler have teamed up to rob Gotham's banks.

The Joker wants payback for his previous defeat.

The Genesis version, published by Sega, is a run 'n' gun game.

Mr. Freeze plans to build his Freeze Cannon and encase the city in ice. To keep the Dynamic Duo busy, he's staged a breakout at Arkham Asylum, freeing the Joker, Two-Face and the Mad Hatter. A guard just barely hits the alarm button before he's frozen and watches as the four make their escape. Now all four villains have their own agendas

The game can be played by two players simultaneouslty, one player with Batman and the other one with Robin. Both characters are identical in terms of playability, and both uses batarangs in long-range attacks, while they use melee attacks in short range.

There are four levels, each one consisting of a straight left-to-right transverse to the end where the boss awaits. In some levels the game switches to a side-scrolling shooter, in which the players must control Batwings..

The game is regarded as being extremely difficult to complete, and also known for pushing the Genesis to its limits in special effects.

Level One: Happy Birthday to Me!

It's the anniversary of the Joker's transformation into the Clown Prince of Crime, and as a personal present he's wreaking havoc across the city while robbing banks and jewelery stores. The most comparable episode to this is The Last Laugh. as they both involve Joker robbing Gotham City of it's riches.

Two-Face hijacks a powerful zeppilin under construction, and plans to take over the city from above. The most comparable episode to this is Blind as a Bat, as they both involve a villain hijacking an aircraft.

The Mad Hatter has taken over a theater, turned it into his own deranged Wonderland and is building an army of robots based on characters from the book. The most comparable episodes to this are Mad as a Hatter, with Hatter building his own Wonderland. Also contains elements from Perchance to Dream in the surreal second half of the level..

Mr. Freeze finally completes his freeze cannon and plans to put Gotham City on Ice. The most comparable episode to this is Deep Freeze, as they both involve Mr.Freeze building an ice cannon.

Freeze sits emotionless in his cold prison cell at night, holding a snow globe of Gotham in his hand. Just than, a guard walks by to check on things. Freeze asks the guard to give Batman a message:&nbsp "Revenge is a dish best served chilled". Freeze stares at his snow globe, while the Joker's insane laughter is heard.

Mr. Freeze is portrayed slightly differently in this game than on the show. The game makes no mention of his wife and instead he wants to incase Gotham in ice for power alone. He also holds a snow globe model of the city, rather than his wife.

Freeze's last line at the end of the game is a reference to almost the same line from Heart of Ice.

Because this game did not have to follow censorship guidelines like the show, the fight scenes are a bit more violent and brutal than on the show.

The sixteen minute animated segments in the video game for the Sega CD are sometimes referred to as a "lost episode" of the series.[1] These segments are intended to be interspersed between gameplay elements of an early-1990s video game and as such, the sound, color and story are not of the same quality of the actual television program. In addition because they are interspersed between gameplay they do not form a complete story.

The Game Gear version was developed by Novotrade and published by Sega. The Joker has assembled a gang of old Batman foes and kidnapped Robin, and the Batman has to go save him. There are four different levels, each with 2 or 3 stages, where Batman runs around beating up thugs and jumping between platforms before taking on a boss. Each stage ends with a boss encounter - some generic machine or thug in the early stages, and a classic Batman villain at the final stage of the level. The four levels takes Batman through a theater where he takes on the Mad Hatter, a frozen office building where he takes on Mr. Freeze, a graveyard where he takes on the Scarecrow, and finally an amusement park where he takes on Harley and the Joker. Batman typically fights with projectile attacks - he has an unlimited supply of batarangs, but you can pick up other weapons with limited ammunition in small item boxes along the way. They're all more powerful than the batarangs. Once Batman gets close to an enemy, he will switch to melee attacks, which deal more damage than the projectiles. Batman can make several types of jumps, both upwards and sideways. Pressing the jump button twice does a double jump. The game starts you out with 9 extra lives, and Batman instantly respawns where he died after losing one, with a full health bar, all ammunition intact, and all inflicted damage and defeated enemies accounted for. There are also multiple extra lives and life bar refill items spread around on the stages, and the game has infinite continues and a password system allowing you to start over from any stage you've previously reached. 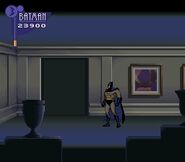 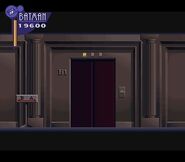 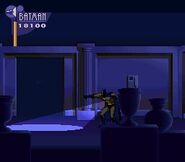 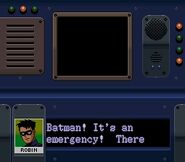 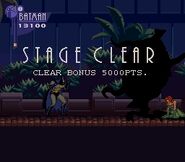 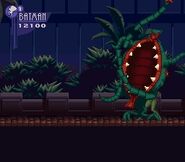 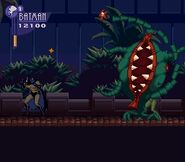 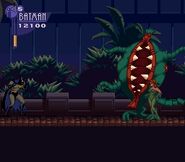 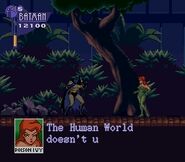 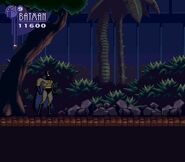 Retrieved from "https://batman.fandom.com/wiki/The_Adventures_of_Batman_%26_Robin:_The_Video_Game?oldid=204438"
Community content is available under CC-BY-SA unless otherwise noted.