For the caped crusader also known as The Batman, see Batman. For the film of the same name, see The Batman (film)

The Batman is an American animated television series produced by Warner Bros. Animation based on DC Comics superhero Batman.

Although the series borrows many elements from previous Batman storylines, it does not follow the continuity set by the comic books nor that of the previous Batman: The Animated Series or its spin-offs. Also, the animation style bears a strong resemblance to that of Jackie Chan Adventures (as both are based from designs by artist/producer Jeff Matsuda), with the designs of many characters, like the Joker, the Penguin and the Riddler, being very different from those of their comic counterparts.

The series made its world premiere on Kids' WB in the United States on September 11, 2004. First-run episodes are broadcast during Kids WB's Saturday morning lineup. Repeats of the show have aired on Toonami and/or Cartoon Network worldwide.

A spin-off comic book series, The Batman Strikes!, is based on the world of The Batman.

In the first season of The Batman, Bruce Wayne (voiced by Rino Romano) is 26 and in his third year as the Batman, protector of Gotham City. A younger Batman confronts familiar foes for the first time, with the aid of Alfred Pennyworth (Alastair Duncan), who guides both Bruce Wayne and Batman when needed, and the technology he has secretly developed, such as the Bat-Wave.

The first season also introduces two new characters, Detectives Ethan Bennett (Steve Harris) and Ellen Yin (Ming-Na), charged with capturing the vigilante Batman for Chief Angel Rojas (Edward James Olmos in his initial appearance, Jesse Corti in all his subsequent appearances). This is somewhat reminiscent of Detective Harvey Bullock and Officer/Detective Renee Montoya of Batman: The Animated Series, who similarly sought to catch Batman, but eventually end up in a tenuous alliance against crime. At the end of Season 1, Ethan Bennett, also an old friend of Bruce Wayne, is turned into Clayface. Adam West, who played a camp version of the Caped Crusader in the live action series of the 1960s, provides the voice for Gotham’s Mayor.

Season 2 introduced other fan-favorite characters with brand new origins, including a sinister version of the Riddler (Robert Englund), Professor Hugo Strange (Frank Gorshin, replaced by Richard Green after Frank's death), Ragdoll (Jeff Bennett), Spellbinder (Michael Massee), Killer Croc (Ron Perlman), and Solomon Grundy (Kevin Grevioux). At the end of the season, Ellen Yin is found out to have been working with Batman, and their partnership ends when Commissioner Gordon (Mitch Pileggi) is introduced. This is the last we see of Ellen Yin. Gordon changes the GCPD's view of Batman and asks Batman to help him make Gotham a safe place for his daughter.

Season 3 introduces a young Barbara Gordon, who becomes Batgirl (Danielle Judovits) and plays a major role along with her father, James Gordon. More villains are added to the series, such as Poison Ivy (Piera Coppola) - who is originally Barbara's best friend in this continuity, a different version of Gearhead (Will Friedle), and a more threatening version of Maxie Zeus (Phil LaMarr).

Season 3 brings the cliffhanger regarding professor Hugo Strange: in "A Fistful of Felt", Batman uncovers that the chief psychiatrist of Arkham cured Wesker only to turn him back into a criminal. In GUCM (Gotham Ultimate Criminal Mastermind) Strange is brought to justice but apparently following in season four Strange New World, Strange went to Arkham only because it was there he could bring up his new schemes.

Another part of the intrigue is Batgirl. The Dark Knight refuses to have a sidekick but in many episodes, he works alongside Batgirl regardless. Although he is sometimes annoyed by Batgirl's presence, like in "The Apprentice," Batman seems to allow her to work with him but it isn't until the episode "Thunder" under Alfred's advice that he agrees to take Batgirl as an actual partner.

Season 4 features a redesign of Bruce Wayne/Batman, that is more reminiscent of the DCAU (Bruce Timm) Batman. He is now drawn with a stronger chin structure and somewhat smaller nose. The season also introduces Dick Grayson as Robin (Evan Sabara) into the series as well as other characters such as Lucius Fox (Louis Gossett Jr.). More villains appear such as Tony Zucco (Mark Hamill), Killer Moth (Jeff Bennett), Black Mask (James Remar) & Number One (Diedrich Bader), Rumor (Ron Perlman), theEverywhere Man (Brandon Routh), Harley Quinn (Hynden Walch), Francis Grey (Dave Foley), and a new Clayface (Wallace Langham). Batgirl returns this season as well, and is now officially part of Batman's team. One episode is set in the future, taking place in 2027 Gotham, where Barbara Gordon has become Oracle (Kellie Martin), Dick Grayson is Nightwing (Jerry O'Connell), and Batman resembles Frank Miller's The Dark Knight Returns version of the character, complete with a new tank-like Batmobile. The season finale featured another superhero from the DC Universe; Martian Manhunter J'onn J'onnz and his alter ego Detective John Jones (Dorian Harewood) when he warned Batman of an invasion by an alien race called The Joining. Batman, Robin, Batgirl and the Martian Manhunter were successfully able to rid the Earth of The Joining. Hawkman, Green Arrow, Flash and Green Lantern also appeared in the Season 4 finale in a cameo at the very end where Batman agreed to join them, Leading some to believe that this is The Batman version of The Justice League. The fourth season of The Batman has been referred to by the creators as the most "Fan Friendly" season.

The fifth and final season was said by producer Alan Burnett to be the show's "Batman The Brave and The Bold season." This season primarily focused on the Dynamic Duo (Batman and Robin) teaming up with members of the Justice League. Batgirl and Commissioner Gordon were dropped from the show as main characters, and only appeared rarely as guests or cameos.

Villains for this Season were a combination of rogues from the superheroes appearing on the show with some Batman villains. Villains included: Lex Luthor (Clancy Brown), Mercy Graves (Gwendoline Yeo), Metallo (Lex Lang), Count Vertigo (Greg Ellis), The Wrath (Christopher Gorham), Toyman (Richard Green), Shadow Thief (Diedrich Bader), Sinestro (Miguel Ferrer), Mirror Master (John Larroquette), and the Terrible Trio (David Faustino, Grey DeLisle, and Googy Gress). Also, Firefly becomes Phosphorus. The Joining returns in the finale in alliance with Hugo Strange as The Joining's leader is revealed. The final episode is a forty-minute movie, featuring all the members of the Justice League who have made an appearance in the show. The two final episodes were aired on March 8, 2008.

The Batman vs. Dracula

Joker and Penguin escaped from Arkham Asylum to find the treasure that is hidden in Gotham Cemetery. Batman persuades Joker while Penguin went to Gotham Cemetery to find the treasure. When he opened a coffin, he bleeds himself with his umbrella and a drop of his blood fell in Dracula's corpse which brings him to life. Dracula then hypnotized Penguin to become his servant. Batman lost Joker when the joy buzzard electrocuted him in the water & drowned. The TV news reported that "The Lost Ones" are disappearing around Gotham. Batman discovered that "The Lost Ones" are vampires and were too tough to fight. Dracula went the Wayne Manor ball as Dr. Alucard and meets Vickie. Bruce later found out that Dr. Alucard is actually Dracula. Vickie reported that Batman was behind The Lost Ones' disappearances. Dracula snatched all the S.W.A.T team units in an empty building and meets Batman on the rooftop. After a battle with Dracula, Batman was hurt and injured. That night, Bruce had a nightmare about his parents getting shot (possibly Joe Chill) offscreen and sees a vampired Batman standing on an opened window before waking up. Joker somehow appears to be alive and folds Penguin that a fisherman found him tangled in his net. When he opened the coffin, Dracula snatched Joker in and turned him into a vampire. Joker breaks into a blood bank and attacks the nurse offscreen. Batman defeated Joker and brought him to the Batcave to find the cure for vampirism. He made the cure and cured Joker. The next night, Batman went to Dracula's underground cave and cured all his victims. Batman stops Dracula from using Vickie's soul to revive his bride, Carmilla. Batman runs to the Batcave underground while Dracula is chasing him. Alfred shot Dracula with an antidote needle, but it doesn't affect him and knocked him out. Batman defeated Dracula with Sun solar energy beat him to bones. Penguin was free from Dracula's control and found the treasure, but the S.W.A.T team show up and he was arrested. The news reporter stated that "The Batman was unfairly blamed for Penguin's crime". Batman continues his duty to defend Gotham from any criminals.

At the conclusion of season four's finale "The Joining", Batman is taken to an orbiting satellite (resembling the Hall of Justice from Superfriends) where he meets members of the Justice League of America. Season Five featured the JLA in major crossover episodes, with Superman appearing in a two-part season opener.

Note: Green Lantern, Green Arrow, Hawkman and Flash's first appearance is actually in the episode "The Joining, Part 2", but only in a cameo, so their main episodes about them can be considered their first appearances. 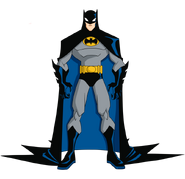 Retrieved from "https://batman.fandom.com/wiki/The_Batman_(TV_series)?oldid=219821"
Community content is available under CC-BY-SA unless otherwise noted.