Batman (1960s series)
Batman vs. Two-Face
The Bookworm was a villain created for the 1960s Batman television series. The character was identifiable by his thick glasses and dark brown leather suit, made to match rare old book bindings. He had an affinity for books and centered many of his schemes around them.  The character was first referenced as part of the mainstream Batman comic books in 1989's Secret Origins Special #1 and appeared, in a form dramatically different from his television counterpart, as an enemy of the Huntress in The Huntress #7-11.  He has since appeared in his original television form, with a cameo on the animated Batman: The Brave and the Bold, and as the main villain in Batman '66 #6, a comic book based on the 1960s series.

The Bookworm appeared in two consecutive episodes of the 1960s television show, "The Bookworm Turns" and "While Gotham Burns."  Little was disclosed of Bookworms origins or motivations over the course of the show, other than the fact that he had an apparent vendetta against Batman and Robin and committed crimes inspired by literary plots.  Like the Riddler, he left clues to lure the caped crusaders to the scene of his next crime -- the clues, of course, always inspired by books.  He also carried knockout gas in trick books, usually the boring type that "put people to sleep," like the Congressional Record.  By the end of the story, it was revealed that his ultimate objective was to steal a heavily guarded stockpile of valuable books.

The Bookworm had a few people who assisted him in his crimes:

In 2013, the original version of Bookworm returned to comic books, albeit outside the mainstream DC continuity, in the pages of Batman '66.  In this story, inspired by the 60s television series, Bookworm attempted to deduce Batman's true identity using a scrapbook filled with newspaper clippings covering the Caped Crusader's crime-fighting career.

Bookworm was apparently one of the villains considered to appear in Batman: The Animated Series. Similarly to King Tut and Egghead however, Bookworm could not be used as a result of the rights to the character being held by the American Broadcasting Network and not DC, due to the characters having been created for the show.

The Bookworm makes a cameo as a prisoner at Iron Heights prison in the Batman: The Brave and the Bold episode "Day of the Dark Knight!" along with fellow inmates King Tut, Egghead, Imposter Mad Hatter, The Archer, False Face, Black Widow, Siren, Marsha, Queen of Diamonds, Louie the Lilac, Ma Parker, and Shame. They are all defeated by Batman and Green Arrow when they tried to escape.

In Batman: Arkham Knight, a bookstore called, "the Bookworm Bookstore" can be found. The store's logo is of a worm wearing Bookworm's glasses and fedora while the store is referenced as having been founded in 1966. 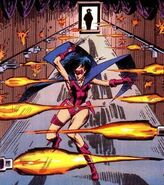