The score for The Dark Knight was composed by Hans Zimmer and James Newton Howard. A soundtrack was released on July 15, 2008 by Warner Records. A second, "Special Edition" soundtrack was also released. Both albums had the same track listing; aside from a different cover the "Special Edition" also included a foldout poster, a photo of the Joker, and three trading cards. But later, on December 9, 2008, Warner Records released a 2 Disc COLLECTORS EDITION, with a 40 page hardbound book, 50 minutes of unreleased music from the movie, and 4 unreleased remixes by The Crystal Method, Paul Van Dyk, Mel Wesson and Ryeland Allison. 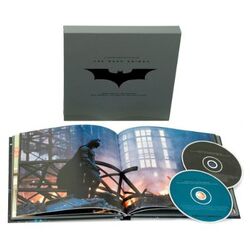 Zimmer originally said the main Batman theme was purposely introduced at the end of Batman Begins, and would be fleshed out in the sequel as the character develops. Zimmer and Howard both realized that creating a heroic theme that a viewer could hum would ignore the complexity and darkness of the character. That the heroic theme is audible only twice, early on in the film, creates what Zimmer described as a "red herring", a kind of musical foreshadowing.

Their nine-minute suite for the Joker is based around two notes. Zimmer compares its style to the band Kraftwerk, who come from his native Germany, as well as his work with bands like The Damned. When Ledger died, Zimmer felt like scrapping and composing a new theme, but decided that he could not be sentimental and compromise the "evil performance projects". Howard composed Dent's "elegant and beautiful" themes, which would work as a contrast. The track names come from lines in the film.

The big part of the song titles from the soundtrack come from lines of the movie:

-I'm not a hero - Harvey Dent/Batman.

-Blood on my Hands - Bruce Wayne.

-A little push - The Joker.

-I Am The Batman - Harvey Dent

-And I Thought My Jokes Were Bad - The Joker

-Agent Of Chaos - The Joker

-Introduce A Little Anarchy - The Joker

-You're Gonna Love Me - Batman

-You Complete Me - The Joker

-The Ferries - The Joker

-We Are Tonight's Entertainment - The Joker

Retrieved from "https://batman.fandom.com/wiki/The_Dark_Knight_(Soundtrack)?oldid=127933"
Community content is available under CC-BY-SA unless otherwise noted.