Batgirl
Notice: The page is about an upcoming work. It may contain incorrect information and potential spoilers.

The Flash is an upcoming superhero film based on the DC character of the same name, taking inspiration from the Flashpoint story. It will also feature appearances by both Michael Keaton and Ben Affleck as Batman throughout its runtime, a first for the Batman Film Franchise.

The movie will change the status quo of the DC Films continuity, introducing the concept of a shared Multiverse.

Barry Allen travels through time to prevent a family tragedy but awakens the next day to find he has radically altered the present timeline.

Originally Denise Di Novi was going to produce the movie but she was replaced by Barbara Muschietti when WarnerMedia shifted away to new writer and director. Set construction started in April at Leavesden Studios. Ray Fisher was initially announced to appear in the Flash movie but was written out when he refused to appear in films overseen by Walter Hamada.[1]

Principal photography began on April 19, 2021. On April 30, it was reported that Knebworth House was being used for external shots for Wayne Manor, with Hatfield House being used for the interior shots. On May 12, a enthusiast caught a video of smoke machines being used on the location. On June 4, it was reported by several tabloids that filming would also take place in Edenborough and Glasgow, both of which would be used as the filming location for Gotham City.

On June 4, Muschietti shared an image of the Keaton Batsymbol on Instagram, teasing the Batsuit his version would be wearing. On June 14 and 18, he shared looks at both the Flash and Supergirl's images. On June 19, the public took images from vehicles from London's streets, many of which implied it was being used as the filming location for Central City. A member of the public also captured a video of Calle being "flown" via cranes. Others showed Keaton on set as Bruce Wayne

On July 26, paparazzi photos and videos appeared on social media of a stunt performer dressed as Affleck's Batman on the Batcycle.[2] 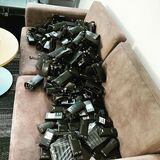 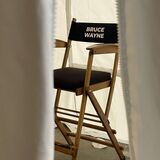 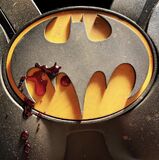