The Joker was portrayed by Roger Stoneburner in the TV series Birds of Prey .

Possibly the man who became the Joker fell in a vat of drainage chemicals because of Batman and became the Clown Prince of Crime. He and Batman had a long rivalry, but Joker never managed to defeat him. Sometime later during one of his many inprisonments at Arkham Asylum psychiatrist, Dr. Harleen Quinzel attempted to cure Joker of his unique case of insanity though only found herself caught in his web of lies and he manipulated her transformation into Harley Quinn. The Joker and Batman had a secret night war in New Gotham City for many long years and one night Batman managed to finally defeated him and Joker was taken into police custody since it became obvious that he would easily escape Arkham. With all of his criminal operations in Gotham cut off, Joker sought revenge against the Dark Knight. He then escaped the police's custody yet again and hired Clayface to kill Selina Kyle and Joker himself shot Batgirl at her apartment in his lust for revenge. Joker was later incarcerated in a maximum prison far away from New Gotham in order to keep New Gotham safe from his mad carnage. Although Joker was never seen in New Gotham again, he left a horrific legacy that went as far as motivating his former accomplice and court jester, Harley to take over New Gotham to honor her captured love. It remained unclear what happened to the Joker afterwards, although it was apparent that he never got the opportunity to terrorize Gotham again. 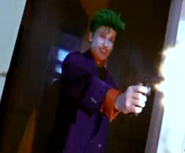 Mark Hamill voiced the Joker, but Roger Stoneburner portrayed him (Mark Hamill was the only one of the two actors who was credited). Joker was only seen briefly in a flashback knocking on Barbara's door, shot her in the midsection, and crippled her.

The overall scene was a reference to Batman: The Killing Joke, with the only difference being that, unlike in that work, Joker clearly knew that Barbara Gordon was Batgirl when he did the action. Unlike the comic though, Joker did not take Barbara and put her on display to make Gordon suffer, however, he did leave her on the ground, for Gordon to find her there.

Retrieved from "https://batman.fandom.com/wiki/The_Joker_(Birds_of_Prey)?oldid=227849"
Community content is available under CC-BY-SA unless otherwise noted.