The Clown Prince of Crime
The Jester of Jackanapes
The Prankster of Plots
W.C. Whiteface, owner of Penthouse Publishers
Clavier Ankh

"A joke a day keeps the gloom away!"
―The Joker[src]

The Joker is an arch-criminal obsessed with absurdity and joke based crimes. Clown-like in appearance and personality, his behavior is very often akin to buffoonery. His abilities as a master conjurer allow him to effortlessly escape from prison many times, making him even more of a threat. Luckily, his crime waves often follow some pattern or theme that usually allows Batman and Robin to predict his next move.

Joker is a member of the United Underworld, a group of four of the greatest criminals from Gotham City.

Nothing much is known of Joker's past except that he is well known for his skill with electronics and was a hypnotist when he was younger. He is now known by many as the Clown Prince of Crime with his fiendish cackle and cunning mind. One of his first goals was to unmask Batman, which ultimately failed. Some of his crimes were for little more than goofy amusement, while others were a little more destructive.

Some time later, Joker teamed up with Penguin, Riddler and Catwoman to form the United Underworld, to disband the United Nations. His role in the Combination Trap (devised by the Riddler) was the Jack-in-the-Box to send Batman flying toward the Penguin's exploding octopus, however one of the unnamed thugs fell onto the jack in the box and was killed by the exploding octopus. The four super criminals managed to dehydrate the nine members of the United World Security Council and take them to the submarine, however Batman and Robin draw it to the surface, where the Dynamic Duo fight the United Underworld. After taking several beatings from Batman, the Joker is finished off by Robin, who punches him over the edge, into the water. He is captured along with the other criminals when Batman and Robin chain them to the side of the submarine and Batman calls the coast guard where the police can take them to prison.

His many schemes after this included committing crimes based on the signs of Zodiac, stealing the famous Renaissance art collection for ransom and trying to take over Gotham City with a flying saucer. He can also easily persuade women to help him in his crimes with his charm and wits.

He was also one of six arch-criminals freed from prison by Dr. Cassandra Spellcraft to form her new invisible gang, but this brief cameo appearance was by a stand-in.

Even though Batman defeated him many times, the felonious funnyman never rested until the last laugh was his.

The Joker was one of the more obsessed villains with unmasking Batman or finding the location of the Batcave. Despite his frenzied efforts to expose the Caped Crusader, Joker was not one of the show's two villains who discovered Batman is actually Bruce Wayne, although he did come close a couple of times.

The most memorable time was when he ran into Bruce's study during a failed robbery at Wayne Manor and accidentally tripped the Batpole switch which opened the secret entrance to the Batcave. He mistook it for a secret passage and slid down one of the poles. However thanks to the quick thinking of Bruce's faithful butler Alfred who turned on the Emergency Batpole Elevator, Joker never reached the bottom and instead crashed to the top of the shaft. He was then further tortured by Alfred giving him several trips up and down the pole before finally being arrested.

As a master criminal, the Joker had many weapons and equipment to help in his crime waves, some even had a portrait of his face on them in contrast to the bat emblem on Batman's gadgets;

Joker had many associates to help in his evil schemes: henchmen, super villains and female accomplices alike:

"Oh how delicious it is!"
―The Joker Is Wild[src]

"I'll have it, by all the saints of wicked mirth, I'll have it. The last laugh will still be mine!"
―The Joker's Last Laugh[src]

"Circle now and intertwine
to neatly wrap these guests of mine.
AH-HAHAHAHAHAHA!
And no more will they cheer and scoff,
I'll cut their circulation off.
HOHOHOHOHOHOHO!
If they do not see the joke,
pull the rope and let them choke."
―The Joker rhymes as his crew captures Batman and Robin[src]

"Let us away!"
―The Joker when it's time for him and his men to escape[src] 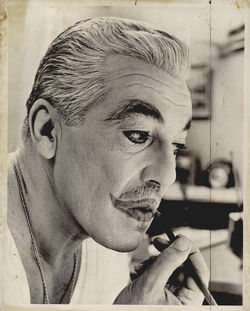 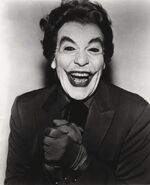 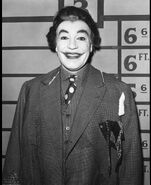 "Have you heard this one?
It'll kill you Batman." 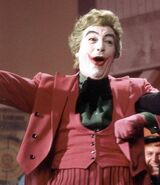 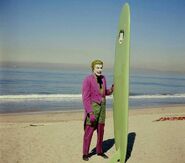 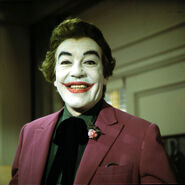 Joker having an frightfully unpleasant time on the Batpoles

Joker with Penguin, Riddler and Catwoman in the film

Joker with Penguin, Riddler and Catwoman in Batman: Return of the Caped Crusaders