The Jokester was The Joker of Earth-3. Since the Batman of Earth-3 was the villainous Owlman, this Joker swore revenge against evil, the opposite reaction for most of his parallel earth counterparts. Jokester became a hero on Earth-3 who sought to stop Owlman. It is suggested that he killed the original Owlman for killing his longtime friends Mikey and talent manager, Harleen Quinzel. He would have a daughter with Three-Face, true identity Evelyn Dent.

Bullied and abused for much of his life, Jack found happiness with the beautiful, loving Evelyn Dent, only to lose her when her split personalities developed. He became a struggling comedian at the Last Laugh comedy club, but then witnessed the club's owner being murdered by the vicious Owlman.

Sick of being bullied, Jackie redesigned his act, focusing all his jokes on Owlman. Aided by manager Harley Quinn, he became a kind of hero to the frustrated Gotham populace for boldly ridiculing every aspect of the thuggish vigilante.

Owlman's retribution, however, was deadly. Harley was murdered and Jackie's mouth was sliced open, leaving him with an unusually wide grin. Whatever sanity he'd possessed vanished in that moment as he became the Jokester, dedicating his life to ruining and humiliating Owlman and his sidekick Talon.

After a long career of fighting and resisting the original Owlman and Talon (and later taking on the new Owlman), Jokester found his place with The Riddler Family discovering his former wife Eve and daughter Duela Dent.

Taking advantage of the arrival of the extra-dimensional travelers Donna Troy, Jason Todd and Kyle Rayner to directly attack the Crime Society, the Jokester left Earth-3 with them. The Jokester along with his allies were captured when they arrived on Earth-8 by Lord Havok and his Extremists. It was during their escape from Lord Havok that the murderous extra-dimensional purification Monitor, Solomon, arrives and proclaims that he will execute these so-called "Earth-hoppers" as he did Duela Dent on New Earth. Enraged by the news that his daughter was killed, Jokester decided to directly attack her killer himself. Not being superpowered, the Jokester was killed when he decided to engage in direct conflict with an obvious superhuman being like the renegade Monitor whose speed was so fast that particular Monitor was able to shoot the Jokester in the back before the Jokester was able to fully turn to fight the murderer of his daughter.

Jokester has a keen analytical and structured mind and is gifted at using distraction to implement direct attacks. While he has no specific superhuman abilities, he is known to hold his own in combat with superhuman adversaries long enough to escape. 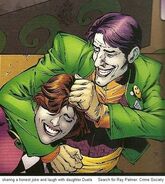 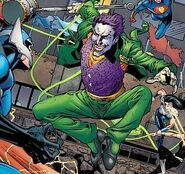 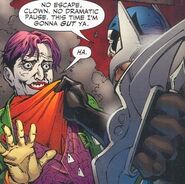 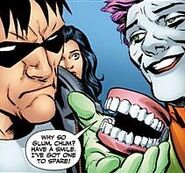