The Penguin is an arch-criminal known for his love of birds and his specialized high-tech umbrellas. Penguin often pretended to be legitimate, and usually won the hearts of all Gothamites before he revealed his true motives. One of the four of Batman and Robin's greatest enemies, his wealth expands his arsenal to a level no other villains achieve, utilizing giant rocket umbrella vehicles and even a custom submarine.

As one of Gotham City's four top criminals, Penguin is a member of the United Underworld.

The Penguin used his many umbrellas as weapons or clever hidden gadgets and devices against Batman. Penguin almost always tried to cover up his criminal activities with some other false enterprises. He also loved to discredit Batman and Robin. But Batman always won out because he didn't concern himself with popular opinion, and his dedication to solving the crime at hand allowed him to cut right to the heart of Penguin's schemes. Penguin also fancied himself to be quite the ladies' man. He carried himself with an aristocratic air, and was always formally attired. A cigarette was always on hand, and since he was one of refined tastes, Penguin used a cigarette holder. In one of the 1966 episodes when Penguin thought that he was rich (before he was outfoxed by Batman) he tried to buy an unnamed country but declined to do so-because he was allergic to Vodka. In another classic Batman episode, Penguin claimed that he once was an actor. In the state prison, his jail cell was P.G.1 along with the Joker, Riddler, Catwoman, King Tut and Egghead in the exclusive Super-villains section. One time when he tried to get back into prison, he was furious when he found that Batman had him placed in a common Jail. At times, Penguin was a genius of crime-he once tricked Batman into unknowingly planning crimes for him and Brainwashed Alfred into working for him-he had a working knowledge of electronics that when he and Joker tried to take over the Batcave, and both criminals were x-rayed with a Bat Beam that noted their physical bone structure. Penguin also suffered from short term memory loss-he failed to recognize Bruce Wayne (he thought that he was an umbrella factory spy) and had trouble recognizing Alfred twice -once when Alfred portrayed a forger and another time when Alfred took the place of a minister (although Penguin had brainwashed Alfred).

In the 1966 Batman film, the Penguin teamed up with Batman's other three greatest foes: The Joker, the Riddler, and Catwoman. After he kidnapped Commodore Schmidlapp, the Penguin lured Batman into a trap, in the form of an exploding shark. That ultimately failed, but then the Riddler devised a combination trap, with the Penguin's role that involved an exploding octopus. Their plan failed, because the millionaire that they kidnapped (to make Batman come to the rescue) was Bruce Wayne, and instead one of the villains' henchmen fell victim to the exploding octopus (it was triggered by the Joker's Jack-in-the-Box).

With five of their henchmen (guinea pigs) dehydrated and turned to dust, the Penguin disguised himself at Commodore Schmidlapp and got Batman and Robin to take him into the Batcave (thus making the Riddler the only one of the four who never entered the Batcave) where he set the guinea pigs on Batman and Robin, however he accidentally rehydrated them with heavy water instead of light water, and thus they vanished at the slightest impact. After they exited the Batcave, Penguin used his Penguin Gas umbrella on them and stole the Batmobile (but they were unaffected due to taking a special pill). Eventually, Batman and Robin fought all of the villains in the ultimate showdown in the submarine. Near the end, Batman fought the Penguin and hit him with the telescope, which knocked him into the water and defeated him. He was captured along with the rest of the criminals when Robin chained them to the side of the submarine and Batman called the Coast Guard.

He was also one of six arch-criminals who was freed from prison by Dr. Cassandra Spellcraft to form her new invisible gang, but that brief cameo appearance was by a stand-in. The only voice made by the Penguin was his bird-like laughter.

Just as Batman and Robin did not crime-fight alone, Penguin needed fellow partners in crime to assist him with his malicious schemes: 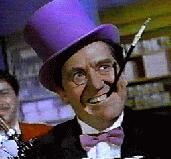 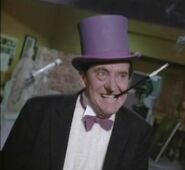 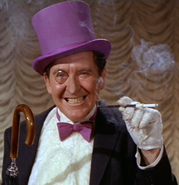 Penguin with Joker, Riddler, and Catwoman in the film

Penguin with Joker, Riddler, and Catwoman in Batman: Return of the Caped Crusaders