"Sorry to rain on your parade, my dear!"
―The Penguin [src]

The Penguin is a Batman villain who appears in the LEGO video game series. Oswald Chesterfield Cobblepot is a devious crime boss who is seldom seen without one of his trick-umbrellas. The Penguin uses his nightclub, the Iceberg Lounge, as a front for his criminal activities. He also owns a pre-nuclear submarine, which he used in his crimes.

The Penguin, along with the Joker and the Riddler, orchestrated the mass breakout of Arkham Asylum. Upon escaping, he created a group consisting of Catwoman, Bane, Killer Croc and Man-Bat. Using the group's help, Penguin planned to use remote-controlled penguins to attack and rob the citizens of Gotham. However, to send it long range, they needed to collect a satellite dish and the Gotham Diamond, using which they could send the signal long range.

After planting the penguins throughout the city, Penguin and Bane visited the city docks to steal a satellite dish. Once they had collected it, the GCPD arrived to arrest them. To ensure his own safety, Penguin abandoned Bane to the police. He and Catwoman then left to steal the Gotham Diamond from the Natural History Museum. After claiming the diamond, the police arrive and the two were separated, with the thief taking the jewel. Penguin was able to escape, but Catwoman was caught Batman and Robin.

Hiding within the docks, Penguin was able to watch the events unfold from afar, but spotted by police officer searching for him. Using his submarine, he fled through the Docks with the assistance of Killer Croc, who drove his Swamp Rider. When Batman and Robin arrived in their own water vehicles, Penguin activated the submarine's automated defences to defeat the Dynamic Duo. After it was destroyed, he and Croc fled into the sewers. Whilst hiding there, Catwoman phoned them from GCPD cells, demanding they freed her in return for the Gotham Diamond. After navigating the sewers and the depart, Penguin and Croc were able to free her.

After obtaining the diamond, Penguin and Catwoman fled to the Gotham Zoo's Arctic World, where Man-Bat had already set up the satellite dish. During the escape, Croc remained behind to deal with the police, but was fought and defeated by Batman and Robin. Whilst Man-Bat held of the dynamic duo, Penguin made the final preparations and activated the device, awakening the penguins throughout the city. However, Batman and Robin arrived in their lair and destroyed the machine, defeating him and Catwoman shortly afterwards. Penguin and his gang were returned to Arkham, where angrily shouted at his defeat.

Led by the Joker, Penguin crashed the Man of the Year event, working with Riddler, Two-Face and Harley Quinn to rob the event guests. When Batman and Robin arrived, he tried to escape with the valuables, but was caught underneath the Batboat. Along with the other villains, Penguin was returned to Arkham Asylum.

After he freed the Joker from Arkham, Lex Luthor demonstrated the Deconstructor on Penguin's cell. Using the opportunity to escape, he grouped with Poison Ivy and Bane, using the latter's mole in their escape attempt. However, Batman and Robin apprehended them by forcing them to tunnel out at a high speed, causing the vehicle to lodge itself in the wall. Sent flying out, Penguin used his umbrella to mitigate the fall, but was incapacitated when Bane landed on him. Shortly afterwards, the Arkham inmates worked together to escape, fleeing across the city.

Penguin fled to the Gotham Zoo's Arctic World, where he hid from the heroes. After unlocking the Zoo's terminal, the player can confront him. After being defeated, Penguin can be bought as a playable character and used in Free-Play Mode.

Penguin and his team. 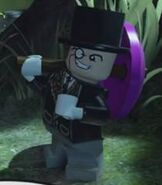 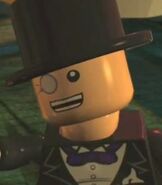 Retrieved from "https://batman.fandom.com/wiki/The_Penguin_(LEGO_Video_Games)?oldid=223779"
Community content is available under CC-BY-SA unless otherwise noted.