"Do you know what happens to gate crashers? They have to match wits with, the Riddler."
―The Riddler[src]

Edward Nygma was a former computer software designer who designed a game that made millions. After losing his job because of his money hungry supervisor, he became the supervillain known as the Riddler.

Nygma was a brilliant man, a genius in many fields, with an absorbing love for puzzles and games. As a computer software designer for Competitron, he designed "The Riddle of the Minotaur", a game that quickly became a smash hit. Competitron's sales soared, and several people became very wealthy, including Competitron's corporate chair Daniel Mockridge. However, Mockridge fired Nygma, despite the fact that he created it, callously dismissing Nygma's efforts as insignificant, and attributing the company's success to its skill with business negotiations and obtaining favorable contracts (i.e., to himself). In fact, Mockridge was attempting to give Competitron exclusive rights to the game, with an eye on a lucrative sale of the company. An angered Nygma threatens him, but Mockridge asks him the question of the episode's title: "If you're so smart, why aren't you rich?"

Two years later, Mockridge was arranging a deal to sell Competitron to Wayne Enterprises, when he saw a riddle directed to him. Nygma resurfaced as "The Riddler," kidnapping Mockridge and planning to kill him. The Riddler then met Batman, who immediately deduced his identity, but he escaped with Mockridge. He gave Batman a chance to save Mockridge by hacking the Gotham power plant, and gave him a complex riddle, in the form of lights flashing, in morse code. He figured out the riddle, ending with a run through the maze at the Riddle of the Minotaur amusement park (an actual simulation of the game).

Confident in his genius, the Riddler outmatched Batman for most of the maze, and he was barley surviving. However, he was unprepared for an encounter with a rival intellect: Batman hacked the "hand of fate", an electronic hand that takes you to another part of the maze. Using it, he flew to the center, solved the final riddle and destroyed the riddler's minotaur. Though the Dynamic Duo survived the maze and saved Mockridge, the Riddler had escaped, leaving Gotham City altogether. In a way, Riddler still had his revenge: though Mockridge made millions from the sale of Competitron, he was paralyzed by fear of Nygma's return (seemingly for the rest of his days).

Because Batman has figured out his true identity, the Riddler undertook a campaign to eliminate all traces of his former self, hacking all virtual documents away, then breaking into banks and government buildings to destroy records bearing his name. He also sent a computer to the Gotham Police with a virtual reality simulation that ended up trapping Commissioner Gordon. Batman entered the virtual reality world to rescue Gordon, where Batman initially struggled, he got the hang of it and gained an advantage. When the Riddler split into 32 versions of himself to stop Batman, Riddler accidentally caused his dream world to disintegrate and went insane. Through a final riddle, Batman and Robin found Riddler at his hideout, where his brain had been temporarily suspended through an electronic backlash.

He recovered sometime later, though, briefly appearing as a member of the jury and court prosecuting Batman in Arkham Asylum. Riddler was absent, however, from the final third of the trial. This suggests he knew the inmates' freedom was to be short-lived, and fled before Batman could nab him. If so, Riddler was arrested once again.

Some time later, the Riddler was released from Arkham early and appeared to have reformed. Joining with one of Gotham's well-known toymakers, Charles Baxter, the Riddler invented several puzzles that quickly became popular with children, also using his Riddler persona to boost the company's profile. He made millions, was well loved, and even had a few women attracted to him.

However, in secret he continued to commit daring robberies, and leaving clues through his company advertisements. Although Batman was stumped, he confronted Riddler, telling him that he knew Riddler would never be able to stop being a criminal, and that he, Batman, would catch him sooner or later. However, the Riddler simply revealed his conversation and made him the laughing stock of a massive party. Despite this, Riddler decided he was right, and lured Batman into a booby-trapped warehouse, where he sealed off all the exits and destroyed the entire building. Batman survived, however, and Riddler was returned to Arkham. He appeared to have been driven insane by his perplexity about how Batman escaped from his "perfect" trap, which Batman refused to tell him.

When The Judge was incarcerating rogues, The Riddler appeared conducting a random heist. The Judge dropped an over-sized book on him, which seemingly killed him. He survived to resurface once again though, against all odds.

Riddler, the Mad Hatter, and Bane banded together to control Gotham during Batman's mysterious absence. With Batman mysteriously gone, few could challenge them. However, Superman had arrived in Gotham and, impersonating the Dark Knight with Robin's aid, quickly foiled their scheme. The Riddler was handcuffed to a cage by Robin, and presumably arrested.

The Riddler had no metahuman powers, but had a genius level IQ. He had an encyclopedic knowledge of a wide variety of subjects, which he incorporated into his riddles and puzzles. He was also quite skilled with technology, and had developed several cutting edge inventions.

Batman understood that his major weakness was his inability to resist showing off how smart he was, by leaving clues that invited someone to try and catch him. To do him credit, Batman was usually the only one who could, which Riddler acknowledged, calling Batman "the only one worthy of the game."

John Glover voiced the character in all his appearances. His costumes were designed by Bruce Timm. 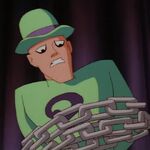 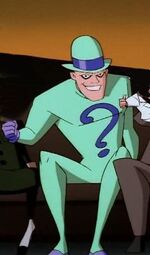 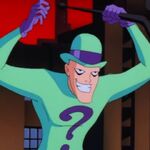 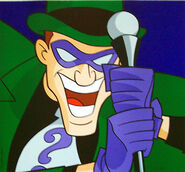