Batman (1960s series)
Batman: The Movie
Legends of the Superheroes
Batman: Return of the Caped Crusaders
Batman vs. Two-Face

"Outwitting Batman is my sole delight, my joy, my heaven on earth, my very... paradise!"
―The Riddler[src]

The Riddler is a clue-dropping criminal who delights in challenging Batman and Robin with his riddles that he leaves behind at crime scenes, always pointing to where he will be next. Although he was a high school dropout, Riddler is still intelligent enough to give the Caped Crusaders plenty of headaches solving his clues, which are often many-layered and contain several possible solutions.

The Riddler is a member of the United Underworld and considered to be an arch-criminal on par with the Joker, the Penguin and Catwoman.

Cocky with a fiendish chuckle, the Riddler undoubtedly has the highest IQ of all Batman's foes. Cold, aloof, and possessed of a steely wit, the Prince of Puzzlers challenges Batman to a duel of wits by leaving a trail of riddles, puzzles and cryptograms. In fact, he is psychologically incapable of committing any crime without offering a clue as to how he can be caught. Unfortunately for the Riddler, he has met his match in Batman who's always been able to decipher even his cleverest conundrums resulting in his defeat.

Batman said that the Riddler once said to him; "A Riddle a day keeps the Riddler away", which means that he is never finished with his schemes until the riddles stop.

In the Batman movie, he comes up with six riddles (two of which were part of a trap for Batman). At the end of the movie, he is defeated by Batman and Robin and apprehended along with Joker, Penguin and the Catwoman. Interestingly enough, in the submarine showdown at the end, he is knocked over the edge and into the water twice; first when Batman ducks a punch from the Joker which hits the Riddler instead, and then when Batman (while holding the Catwoman's cat) spins him around with the telescope, making the villain extremely dizzy and knocking him back into the water.

He was also one of six arch-criminals freed from prison by Dr. Cassandra Spellcraft to form her new invisible gang, but this brief cameo appearance was by a stand-in.

Even though the Riddler is constantly outsmarted by Batman, it makes him even more determined to catch Batman out with riddles that he could never solve and defeat him.

Just as Batman and Robin do not go at crime-fighting alone, Riddler needs fellow partners in crime to assist him with his malicious schemes:

The Riddler constantly made riddles that revealed his next crime in an attempt to baffle Batman, but they always led to his downfall:

"Riddle me this..."
―Riddler, just before he says his riddle[src]

The Riddler planning with United Underworld 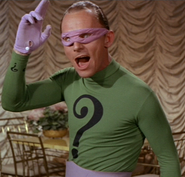 Riddler with one of his female assistants Molly 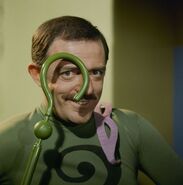 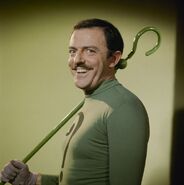 Riddler with Joker, Penguin and Catwoman in the film

Riddler with Joker, Penguin and Catwoman in Batman: Return of the Caped Crusaders