"Riddle me this, Batman. Why won't you LEAVE ME ALONE?!"
―The Riddler[src]

The Riddler is a villain who appears in the LEGO video games. A criminal obsessed with puzzles, word-games and riddles, he often pulls of elaborate heists and robberies, leaving behind puzzling clues at the end of each crime. These often lead to his downfall and capture by Batman. Unlike the rest of the rogues gallery, the Riddler loathes needless bloodshed, feeling that he is above such barbaric acts. The crimes that he commits are generally robberies or kidnappings.

The Riddler was one of the three masterminds who planned a mass breakout of Arkham Asylum. He recruited Two-Face, Poison Ivy, Mr. Freeze and Clayface, hoping to rob the Gotham Gold Reserves. To achieve the plan, they would need to cross the Gotham Bay to the building's island, climb up to a back entrance and break into the vault. To make the process easier, Riddler planned to use one of Freeze's cannons, Ivy's Vine Plants, a prototype laser and the main vault's key.

For the first part of the plan, Riddler and Clayface go to the Gotham Back to steal the key. Navigating the streets, they blew up the entrance to gain access to the Bank Safe, attracting Batman and Robin's attention. After retrieving the key, Clayface became distracted with the bank's gold bars, leaving Riddler to impatiently leave him behind to hide from the Dynamic Duo. After Batman and Robin defeated his men, Riddler escaped the scene with Two-Face in his armored truck, though left a clue to their grander scheme.

Riddler then asked Mr. Freeze visit one of his old lairs to retrieve the Freeze Cannon. With GCPD already on the scene, they fought their way through the officers and access the laboratory. After accessing the cannon, Riddler fled with it whilst Freeze awoken his henchwomen from suspended animation. He was able to escape the scene with Two-Face, leaving another clue for Batman. After learning the GCPD were tracking them, Riddler realized that Batman had placed a tracker on their truck. Leaving the cannon in his goons' hands, he and Two-Face embarked on a chase with the Dynamic Duo, eventually resulting in the vehicle's destruction. Cornered by Batman and Robin, Riddler was rescued by Poison Ivy, prompting him to leave a third clue.

Arriving at the Botanical Gardens to access the vine plants, Riddler and Poison Ivy fought their way through patrolling officers and security. Making their way to the Glasshouse, they collected the seeds, though he left her behind when her fixation of plants distracted her. Riddler once again escaped capture by Batman and Robin, leaving a final clue to his plans behind. Reuniting with Two-Face, they broke into Wayne Enterprises to steal their prototype Laser Cannon. Battling security guards and bypassing many security measures, they were able to gain access to the lab and steal the weapon.

With all the necessary equipment finally in their possession, Riddler and Two-Face began their heist. However, security was already on high-alert, due to a tip-off from Batman, forcing them to battle through guards and measures set up. After gaining access to the vault, Batman and Robin arrived on the scene. After Two-Face was defeated by the duo, Riddler attempted to defeat them, using the laser cannon and mind-control technology. Despite their best efforts, they were defeated and returned to Arkham. Furious at his defeat, Riddler vowed revenge on Batman and Robin.

Riddler joined the Joker in crashing the Man of the Year award ceremony and robbing the guests. When Batman and Robin arrived on the scene, he fled below the stage and initially tried to hide from the Dynamic Duo. After being discovered, Riddler fought them, but was defeated.

When Lex Luthor broke the Joker out of Arkham, Riddler was one of the other criminals released when they used the Deconstructor on his cell wall. Along with Harley Quinn, Riddler joined Two-Face in his truck, but were recaptured when they crashed into a fallen statue, put into place by Batman. However, they were able to escape and fled into Gotham City.

In the open world Gotham, Riddler can be found at the top of Wayne Tower and fought by the player. After defeating him, he can be purchased as a playable character and used in Free-Play Mode. Riddler is required to access various Riddler boxes placed around the city, many of which hide collectables to obtain 100% completion.

Riddler does not appear in the main plot of the game, but can be unlocked through a side mission. As part of a revenge scheme against Mister Mxyzptlk, he hides a bomb for him to find, leaving a riddle to its location. The Riddler also appears as a boss in the extra Batman '66 level, where he, Joker, Penguin and Catwoman attack a diner, but are apprehended by Batman, Robin and Batgirl.

The Riddler appears in the game as a boss, but is not a playable character. He is recruited by Lord Vortech to help take over the LEGO multiverse invades Middle-Earth, working with Brainiac, Overlord and the Balrog. Riddler is defeated by Batman, Gandalf and Wyldsytle. The version from The LEGO Batman Movie also appears as part of the tie-in level pack.

When Batman and the Justice League disappear, Riddler works with Joker, Scarecrow and Clayface to break into the Gotham City Police Department and steal their confiscated equipment. The group also confront Batgirl and Nightwing, leading to a fight in the Iceberg Lounge. After defeating the heroes, Riddler is able to escape with Catwoman and Clayface.

When the members of the Legion of Doom voice their suspicions of the "Justice Syndicate", Riddler reveals Harley Quinn's claim to have seen them banish the League. He takes part in their attempts to defeat the Earth-3 villains, but is defeated when Lex Luthor betrays them. Riddler becomes involved with the later battles with the Syndicate and forces of Apokolips, but is not directly involved in the tactical actions to defeat them. After the defeat, he flees the League with the other villains after the Rookie decides their fate. 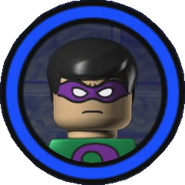 Retrieved from "https://batman.fandom.com/wiki/The_Riddler_(LEGO_Video_Games)?oldid=229496"
Community content is available under CC-BY-SA unless otherwise noted.